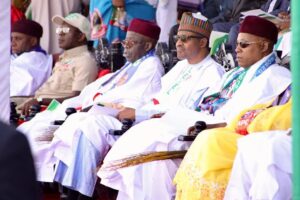 Naija News recalls that the President had appealed to the APC governors to allow him to pick his preferred successor ahead of the party’s presidential primaries on June 6.

Buhari made the appeal during a meeting with the governors and the National Chairman of the ruling party, Senator Abdullahi Adamu, at the Presidential Villa, Abuja on Tuesday.

A Presidential source disclosed that Buhari is torn between the choice of Lawan and Osinbajo, following the emergence of former Vice President Atiku Abubakar as the PDP presidential candidate.

According to the Daily Sun, a team is looking at the pros and cons of selecting Lawan or Osinbajo, with the view to giving President Buhari informed advice for the final decision to be made on his return from Spain by Friday.

The presidential source said Buhari during his meeting with APC governors carefully highlighted that his choice would be someone capable of driving his visions.

He said Osinbajo has also strongly defended Buhari’s policies and projects, having played a lead role in its execution with the management of key initiatives central to the administration’s strategic imperatives.

It was learned that a lobby group would be raised in the coming days to work in the north and south, depending on who the President chooses between Osinbajo and Lawan.

The lobby group is waiting to meet with northern and southern elders in APC to solicit support for either of the two presidential aspirants.