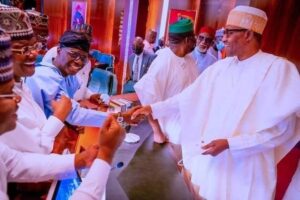 A meeting the APC governors held Tuesday evening to discuss the stance of President Muhammadu Buhari on the party’s presidential candidate ended in a deadlock, PREMIUM TIMES has learnt.

The meeting was held in Abuja, minutes after the APC governors had a meeting with President Muhammadu Buhari.

The governors meeting is to reconvene at 8 p.m., one of them told this newspaper.

At the meeting with the president, Mr Buhari told the governors that he would like to pick his successor and wants the governors to support him to do so.

The president left for Spain immediately after his meeting with the governors.

At their own meeting, one of the governors told PREMIUM TIMES, members could not agree on how to implement the president’s request.

“We believe the president has not settled for any particular person and that is why some governors felt the best thing to do was to nominate two of us (one each from the north and south) to the president for consideration,” the source said.

The source said many northern governors, however, argued that no southern governor could defeat Atiku Abubakar, the PDP presidential candidate, in the presidential election; so the north should be given preference.

This angered some southern governors.

Some of the southern governors also argued that the nominees do not have to be state governors. This position is believed to have been pushed by governors loyal to some southern presidential candidates such as Vice President Yemi Osinbajo and ex-Lagos governor Bola Tinubu.

Since the governors could not agree, they resolved to end the meeting and reconvene at 8 p.m.

YOU MAY ALSO LIKE:   UBA: A Bank of Many Firsts, in pursuit of Customer Satisfaction

PREMIUM TIMES reported how President Muhammadu Buhari told APC governors that he would want to pick his successor and needs the governors to support him to do so.

Mr Buhari said this Tuesday at a meeting with governors elected on the APC platform at the State House, Abuja.

“In keeping with the established internal policies of the Party and as we approach the Convention in a few days, therefore, I wish to solicit the reciprocity and support of the Governors and other stakeholders in picking my successor, who would fly the flag of our party for election into the office of the President of the Federal Republic of Nigeria in 2023,” the president said at the meeting which was also attended by the APC national chairman.

Mr Buhari told the governors that he realises the ‘compelling need’ for him to provide ‘stronger leadership to the party under this transition process.’

YOU MAY ALSO LIKE:   We Are Committed To Safety And Security In Maritime Operations - NIMASA Boss

The stronger leadership, Mr Buhari said, is not only to ensure that APCs electoral fortunes improve but also to ensure that the party ‘retains power at the centre’ by winning the presidential election.

The APC holds its presidential primary from June 6 to 8.

At the meeting with the governors, Mr Buhari also stated the factors he would consider in supporting a presidential candidate among the 25 persons seeking to fly the APC flag.

“Our objective must be the victory of our party and our choice of candidate must be someone who would give the Nigerian masses a sense of victory and confidence even before the elections,” he said.