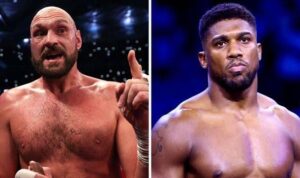 British-Nigerian boxer, Anthony Joshua, is set to return to the ring after loosing his four titles to Ukrainian, Oleksandr Usyk.

Fury had last week offered to fight Joshua for 60 percent of the matchday revenue, which would see the heavyweight rivals clash for Fury’s world title before the end of the year.

In accepting the terms of the offer, the British-born Nigerian boxer, however, insisted on fighting Fury before the end of the year.

“258 [Management] and Matchroom Boxing can confirm, on behalf of Anthony Joshua, that we accepted all terms presented to us by Fury’s team for a fight December 3 last Friday. Due to the Queen’s passing, it was agreed to halt all communication. We are awaiting a response,” Joshua’s team tweeted on Tuesday.

Fury had planned to fight Oleksandr Usyk in an undisputed fight in December but the Ukrainian revealed he will not be ready until February or March, which saw Fury turn his attention to Joshua who lost to Usyk last month in their Saudi Arabian rematch.