How I’II Turn Nigeria Around In First 100 Days – Atiku 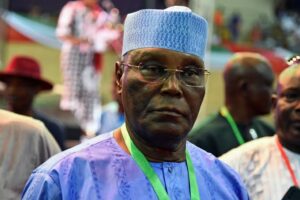 The presidential candidate of the Peoples Democratic Party, PDP, Atiku Abubakar, has promised to lead Nigeria out of darkness and turn the economy around within his first 100 days in office if elected president in 2023.

Atiku, who spoke at the Private Sector Economic Forum organised by the Lagos Chamber of Commerce and Industry(LCCI) in Lagos on Tuesday, also promised to make poverty eradication the centrepiece of his economic agenda if he wins the 2023 presidential election.

The former Vice President promised a wide range of sweeping policy reforms, including removing electricity from the exclusive list to the concurrent list so that states can produce electricity for the citizens in their respective states.

He promised that his economic growth and development agenda seeks primarily to stimulate the growth of the economy, that it envisions an economy that is modern, dynamic, and competitive, capable of taking its rightful place among the top 20 economies of the world.

The former Vice President promised to elevate production for export to a top policy priority and long-term investment priority and promote export of manufactured goods.

Justifying this agenda, he said, “First, a warm handshake with the private sector. We will support the private sector to drive growth. We will establish strong partnerships in investing in infrastructure, creating jobs, income and in the fight against poverty.”

While saying that his team will listen to the private sector more, the said there will be regular dialogue to build consensus, improve trust between the government to enable the engendering of new reform initiatives that will be easier to implement and sustain.

YOU MAY ALSO LIKE:   Traffic robbers attack Actress Kemi Afolabi  On Lagos-Ibadan Express

On security as a policy, he said he will take tough and difficult decisions on security matters without fear or favour. “Investment is a cowardly animal and is fearful of conflicts and insecurity,” he said.

YOU MAY ALSO LIKE:   Big Brother Naija Season 7 Auditions Begin - See How To Audition And Participate

He assured that as a short-term measure to ensure enhanced supply within the first year of the new administration, saying “I shall initiate and implement an emergency power programme (EPPs) that can deliver additional capacity in certain key areas.

“Over the medium term, I will then go on to propose legislation for the removal of the entire electricity value chain from the exclusive list and give states the power to generate, transmit and distribute electricity for themselves.”

He argued that investments in additional generation capacity are futile without consideration for the complementary transmission and distribution infrastructure to wheel the additional energy.

Also, he said, ahead of procuring additional generation, both transmission and distribution capacities would be enhanced with private sector support for investments.

YOU MAY ALSO LIKE:   BREAKING: Fire Razes Shops Under Apongbon Bridge In Lagos

“We shall incentivize private investors to invest in the development of multiple green-field mini-grid transmission systems to be looped into the super-grid in the medium to long term while allowing the FG focus on policy, regulation, and standardization.

“I will stimulate growth to create jobs and wage war against hunger. The economy must grow for economic opportunities to abound.

“Poverty reduction shall be the centrepiece of our economic development agenda and economic performance shall henceforth be measured by the number of jobs created and the number of people lifted out of poverty.

“Within the first 100 days in office, I will create an Economic Stimulus Fund with an initial investment capacity of approximately US$10 billion to prioritize support to MSMEs across all the economic sectors.”

Previous After Losing 4 Belts, Anthony Joshua Set To Fight Tyson Fury December 3rd
Next MAUREEN BADEJO – NO REST FOR THE WICKED, A HOPELESS AND POINTLESS MISSION COMES TO AN END