Home / cover / MAUREEN BADEJO – NO REST FOR THE WICKED, A HOPELESS AND POINTLESS MISSION COMES TO AN END

MAUREEN BADEJO – NO REST FOR THE WICKED, A HOPELESS AND POINTLESS MISSION COMES TO AN END 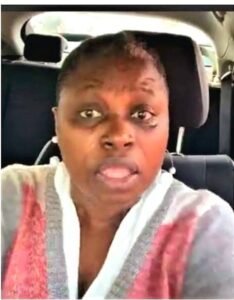 In my opinion, I really think that the reason God is patient with MEN when we tread upon dangerous paths is that he either wants us to repent from our HOPELESS AND POINTLESS WAYS or use our own hands to put ourselves in HARMS WAY.

For almost two years, I wrote different articles to call this woman to order, but no, she was determined to destroy herself and her poor life.

This woman came out with fabricated matters and delusional arguments against MFM and Dr. D.K Olukoya. As at the 13th day of September, 2021, she ran into another rock that will surely straighten her life for the better.

Frantic efforts by London-based Vlogger Maureen Badejo to escape or delay the consequences of her defamatory broadcasts against Dr. D. K. Olukoya, General Overseer of Mountain of fire and miracles ministries MFM and his wife Dr Folashade has suffered a crushing defeat, as the High Court sitting at Strand, London has refused her leave to appeal.

I had COVERED THIS MATTER SOMETIME LAST YEAR that the Court in England found Maureen Badejo liable for defamation and character assassination thereby awarding damages, amounting to Hundred thousand pounds (100,000) to the Olukoyas.

Since the judgment, Ms. Badejo has been running from pillar to post, blaming her own lawyer for her defeat, and eventually applying for leave to appeal against the decisions.

In his signed judgment on the 13th day of September 2022 the Honorable Justice Lavender sitting at the Royal Courts of Justice, Strand, London refused Maureen permission to appeal, describing her application as “totally without merit” His Lordship also barred Ms. Badejo from requesting a reconsideration of its order.

In providing the reasons for his decision, the Judge observed that no reason for extension of time to appeal was canvassed by the applicant just as no arguable ground of appeal had been identified.

YOU MAY ALSO LIKE:   UBA’s LEO Continues to Evolve, Remains Smartest Banking Chatbot

Describing Ms. Badejo’s proposed grounds of appeal as “BOTH HOPELESS AND POINTLESS”, His Lordship concluded by pointing out that no useful purpose would be served by her proposed appeal.

This development bears clear testimony to the adage that lies and falsehoods may endure for a long while but truth will eventually catch up with them. Awọn adiye n bọ si ile lati gbe PERMIT MY MOTHER TONGE IT MEANS The Chickens are coming home to roost!!!

FIND ATTCHED THE JUDGEMENTS AS IT READS: 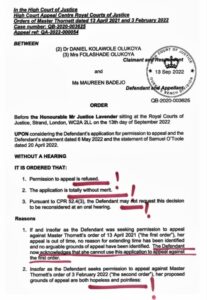 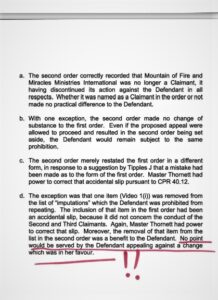