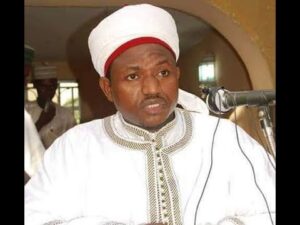 Sheikh Abduljabbar Nasiru Kabara, recently arrested and detained by the Kano State Government over alleged blasphemy is reportedly experiencing medical issues in detention.
The lawyer to the Kano based cleric, Rabiu Abdullahi noted that his client’s health condition has been confirmed by a medical consultant from a government hospital in the state.

It was gathered that the cleric will undergo some tests before the exact ailment can be determined.

Abdullahi while speaking with newsmen on Wednesday confirmed that he has been placed on some medications by health personnel to manage the situation.

“Yes, he is not healthy. He is in a serious health situation because he is even bleeding from the anus.”

“A medical personnel has confirmed that he is not healthy. He asked if he was having health issues before he was arrested and he said no. If he was diagnosed with a stomach ulcer and he said nothing was wrong with him before his detention. He was also asked if he had ever had this type of bleeding before and he said he never experienced it in his life.”

“The doctor then advised him on what to do and prescribed some drugs. This is pending the outcome of some tests that will confirm his exact condition,” he stated.

Concerning whether they are suspecting any foul play from anywhere to get him eliminated, the lawyer said, “Even if there is any foul play, we cannot say it because we have no proof. We only want the world to know what is happening and judge for themselves.”

Previous ‘Money! Nonsense, We Have Never Lacked it’ – Bishop Oyedepo Finally Breaks Silence On Sack Of 40 Pastors
Next Reactions As Nigerian Graduating Student Rocks “Cheated In Every Exam” T-shirt