Home / cover / Alao-Akala Not Responsible For My Impeachment, Says Ladoja

Alao-Akala Not Responsible For My Impeachment, Says Ladoja 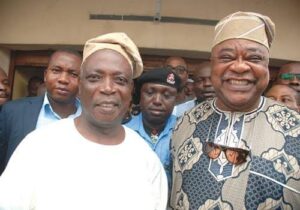 Former governor of Oyo State, Senator Rashidi Ladoja, has described the death of his former deputy and successor, Chief Adebayo Alao-Akala as a huge loss to him.

Ladoja, who is the Osi Olubadan, was impeached and removed as governor on January 12, 2006 and Alao-Akala was sworn in.

But in a condolence message to mourn the late politician, Ladoja said Alao-Akala did not betray him during the impeachment.

The former governor said his relationship with Alao-Akala which started in the 1970s long before they entered into politics remained cordial until the Ogbomoso-born politician died.

He said although they had occasions of political disagreements but such did not injure their personal relationship.

Ladoja said he was shocked to hear the news of Alao-Akala’s death, recalling that they were together at two separate functions in Ibadan recently, the last being the funeral of the Olubadan of Ibadan, Oba Saliu Adetunji.

Ladoja siad, “We were very close. So close that I celebrated his 40th birthday for him in one of my houses in Apapa, Lagos. That was 31 years ago. He was introduced to me by a mutual friend, Tommy Oyelade. That was in the 70’s and since then we had been friends.

YOU MAY ALSO LIKE:   Next Titan contestants explore product advantage of Heritage Bank’s Octiplus

“He followed me on exile during the NADECO days when Sani Abacha was looking for those of us in the NADECO. He stayed with me in my house in England and we were going to my office together. We lived together for about a month.

“He came into politics through me. He followed me to the defunct UNCP. And when he wanted to contest as chairman, the Ogbomoso establishment opposed it and he was disqualified.

“When a new dispensation started in 1998, he came to me and said since I am the one he followed into politics and would not want to go to a different party. But given the circumstances of Ogbomoso politics, he would like to join APP and realise his ambition as council chairman . And I agreed with him to go to APP where he contested and won the council chairmanship election along with seven councilors out of 10, which meant that he proved his mettle.

YOU MAY ALSO LIKE:   BREAKING: Plateau Speaker Ayuba Impeached

“It was because of me that he left APP and joined PDP. He wanted to run for chairmanship again, but this was fiercely resisted by party members who had been in the party before him. But fortune smiled on him and I took him as my deputy.
He accepted me as his boss until his last day.

“On some occasions, we had different opinions, but such differences never went beyond the issues. The differences did not go into our hearts because we had some peculiar love for each other. Our boss-subordinate relationship lasted till he died.

“In fact, the last two times we met at functions, first at the anniversary of Alhaji Lam Adesina. He told me he would have to rush to attend other functions in Lagos that day. That was in November last year. At the burial of the Olubadan of Ibadanland, Oba Saliu Adetunji, we also met. On both occasions, he took permission from me before leaving. He said he naturally would not leave me behind at any function.

YOU MAY ALSO LIKE:   Adebola Sanni: Fin-Tech, solution to financial inclusion problems in Africa

“Maybe as a result of his training as a policeman, he loved taking and carrying out orders. He took orders from superiors without questioning them. When Alao-Akala addressed himself to an assignment, he carried it out with total commitment.

“I commiserate with his wives,children and his political family.
As an older person, I should not go to his house now. But I have sent a delegation to Ogbomoso to condole with the family.
I pray that God will forgive his shortcomings. “

Tags Alao-Akala Not Responsible For My Impeachment Says Ladoja