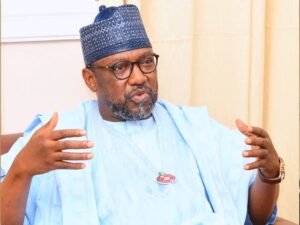 The Independent National Electoral Commission (INEC) has denied knowledge of the leadership change in the ruling All Progressives Congress (APC).

It was gathered that INEC made this known on Thursday in a letter sent to Governor Abubakar Sani-Bello of Niger, who is the acting chairman of the party’s caretaker committee.

The officials pleaded not to be named disclosed that Sani-Bello had on Wednesday written to INEC in his capacity as the acting national chairman of the APC’s Caretaker Extraordinary Convention Planning Committee (CECPC) inviting the commission to their National Executive Committee (NEC) meeting scheduled for next week Thursday via zoom.

Sources confirmed to Daily Trust that the APC had send a letter to the electoral commission revealing a change of guard from Governor Mai Mala Buni to Sani Bello.

YOU MAY ALSO LIKE:   APC Convention: Group Warns Buni Caretaker Committee Not To Change February Date

“Yes, there was a letter from the APC, which the commission replied because there were legal issues…They did not do the right thing,” one of the officials of the electoral body said.

Another official said INEC in the reply told the ruling party that it was only the national chairman and national secretary of the party that could write such a letter.

This means that the commission was yet-to-be be formally notified of the leadership change in APC.

YOU MAY ALSO LIKE:   Cristiano Ronaldo Lights Up Old Trafford, nets twice in first game back with Manchester United

The Electoral Act 2022 in Article 82 (1) recently signed by President Muhammadu Buhari stated that: Every registered political party shall give the commission at least 21 days’ notice of any convention, congress, conference or meeting convened for the purpose of “merger” and electing members of its executive committees, other governing bodies or nominating candidates for any of the elective offices specified under this Act.

Recall that the Niger State Governor had on Monday take over the leadership of the APC, claiming he has the backing of President Buhari

Confirming the change of leadership, Governor Nasir El-Rufai of Kaduna State said Buni who is on a medical trip in Dubai had been removed and won’t return as chairman.

YOU MAY ALSO LIKE:   OMSL DIRECTORS REFUTE ALLEGED MISAPPROPRIATION OF $18M DOLLARS BY CHAIRMAN

El-Rufai accused the Yobe governor of widening crisis in the party, claiming that those loyal to Buni had obtained a court order to stop the APC convention from holding.

Also, Governor Rotimi Akeredolu of Ondo State had accused Buni and some ‘yahoo yahoo‘ governors of trying to destroy the APC.

Backing Buni, Governor David Umahi of Ebonyi State had said the Yobe governor will return as the party chairman after his medical trip.

Speaking to his supporters, the embattled governor insisted that there was no crisis in the ruling party.