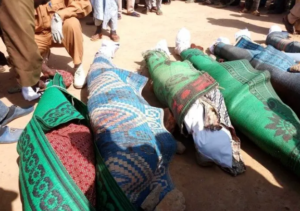 Residents of Zurmi town, in Zamfara State, protesting over incessant bandits attack in their domain have stormed the emir’s palace with corpses of their loved ones killed in recent attacks.

According to reports, the protesters had earlier gone around the town with the corpses during the protest, which started yesterday morning.

Recall that many people have been killed and several others displaced following endless bandits attack on communities in the State. Eleven people were killed last week when the assailants attacked a community in Zurmi local government area.

It was learnt that the protesters also blocked Gusau-Jibia road, smashing the windscreens of vehicles parked by the roadside. The situation was said to be brought under control after some security operatives were deployed to the area.

The State’s Police Command is yet to respond to the incident as at the time of filing this report.