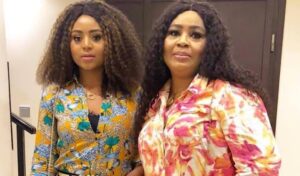 Rita Daniels, has been trending on social media over the week following her alleged traditional marriage with her young lover.

It all started when photos of her alleged traditional marriage went viral on internet which attracted several reactions from fans and netizens.

Days after the photos were shared online, a troll took to Rita Daniels’ Instagram page to address her inappropriately, which resulted to exchange of words between the troll and the mother of Regina Daniels

Although, since people have been reacting to the photos, she has neither debunked nor confirmed it, many fans have been criticizing her for giving her daughter’s hands in marriage to an “old man” while she allegedly married a young man.

However, a fan got more than what he expected as Rita Daniels lambasted him and noted that he’s not worthy to have a mother.