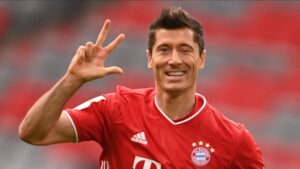 Robert Lewandowski became the third player in Bundesliga history to score 250 goals as Bayern Munich ended Wolfsburg’s unbeaten start to the Bundesliga season in a come-from-behind win at the Allianz Arena.

denied a close-range effort at goal by Jerome Roussillon. The record champions remained on top in terms of possession throughout the first half, but trailed for much of it after Maximillian Philipp met Kevin Mbabu’s cross on the volley to give Wolfsburg a sixth-minute lead. Thomas Müller flicked a near-post header off target with Bayern’s first meaningful response, before Wout Weghorst had a thunderous breakaway goal ruled out for offside. Wolfsburg put bodies on the line to repel quick-fire chances for Lewandowski and Serge Gnabry, but continued to threaten on the counter with another Philipp volley sailing narrowly wide off David Alaba’s left thigh. Sane ballooned over from 18 yards, before Lewandowski met Kingsley Coman’s inch-perfect cross to head Bayern level in added time.

YOU MAY ALSO LIKE:   I’m disappointed Ortom is blaming me for Benue killings - Buhari

After restoring parity with the final effort on goal of the first half, Bayern forged ahead with the first attempt of the second. Jerome Boateng picked off a Wolfsburg attack and immediately sent Lewandowski in on goal. The Bundesliga’s record foreign scorer put Maxence Lacroix on his back, before slamming in at Koen Casteels’ near post. Gnabry was presented with a glorious opening to extend the home side’s lead moments later, but failed to make the desired connection with Coman’s back-post cross. Wolfsburg contained Bayern for the remainder, but only threatened a way back in the closing stages. Had it not been for Manuel Neuer, they might have succeeded. The Bayern captain twice thwarted substitute Bartosz Bialek to keep his side within a point of leaders Bayer Leverkusen, who they face in their final league encounter of 2020 at the weekend.