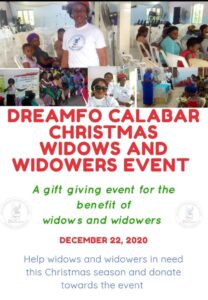 It is day set aside to amplify the gift and benefits of our Widows and Widowers in our society especially Calabar chapter.

The theme for 2020 is tagged “EXCEPTIONAL DREAMFO CALABAR CHRISTMAS WIDOWS AND WIDOWERS MEMORABLE EVENT”. This year’s theme is on the following demands:

– A gift giving event for the benefit of widows and widowers

– Help Widows and Widowers in need at this festive season

DREAMFO both from home and diaspora lent her voices to the activity by taking out time to celebrate the Widows and Widowers of her branch members.

Saying further, according to the organisers when speaking with Oluwaseun Trust BethNews as her official media director says all Dreamfo Widows and Widowers are very important and needed gift giving in this season as many of them were encouraged
to assert their power as change-makers, with the little things/ empowerment God has granted them in their immediate environment to inspire their friends and others.

YOU MAY ALSO LIKE:   Tunde Bakare joins 2023 presidential race

This event would also make an amazing time getting to interact with one another, whilst learning about the essence of celebrating themselves as Dreamfo Widows and Widowers.

DREAMFO enjoins everyone to support Widows and Widowers in our society especially this period of pandemic.

The Nigeria Police Force has revealed the identity of the professor who brutalised ...