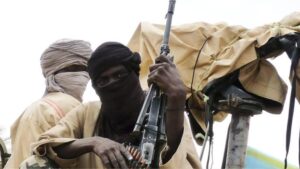 Scores of residents have been feared killed in a midnight raid by terrorists known locally as bandits, in Kebbi State.

The bandits in their large numbers invaded Dan-Kade village in Unashi district under the Zuru chiefdom, killing an unspecified number of persons on Sunday night.

Residents have fled their homes as bandits have reportedly burnt many houses in the area.

A leader of a local Vigilante group in Zuru, Mani John, confirmed the attacks, according to Sahara Reporters.

The Kebbi State Police Command could not yet be reached for comments as of the time of publishing this report.

Bandits’ attacks have become a menace in Kebbi and almost every part of northern Nigeria.

Recall this newspaper reported at the weekend that bandits launched a brutal attack on the same Dankade village. It was learnt that the bandits operated unchallenged from 3pm to 7pm last Friday.

In recent times, northern Nigerian states like Kebbi, Zamfara, Kaduna, Sokoto, Niger and Kaduna have witnessed incessant attacks by terrorists. These lawbreakers have killed thousands of people, kidnapped hundreds and displaced thousands from their homes.