Home / cover / CAN Blast Buhari: Killings in Nigeria not cultural, your conversation with Trump is weak

CAN Blast Buhari: Killings in Nigeria not cultural, your conversation with Trump is weak 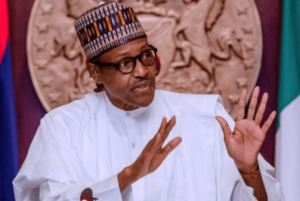 The President, Major General Muhammadu Buhari (retd.), on Tuesday revealed that at the heat of the bloody clashes between herdsmen and farmers in Nigeria, the United States President, Donald Trump,  once asked him why he was killing Christians.

This was just as the President charged ministers and other top government officials to go “on the offensive” in defending his regime and its achievements.

Buhari said these in his closing remarks at the two-day ministerial performance review retreat held at the Presidential Villa, Abuja.

At a point, the President digressed from his prepared speech and narrated his encounter with Trump on the bloody clashes.

He said he managed to explain to the American leader that the clashes were not about ethnicity or religion.

He said, “I believe I was about the only African among the less developed countries the President of United States invited.

“When I was in his office, only myself and himself, only God is my witness, he looked at me in the face, he asked,  ‘why are you killing Christians?’

“I wonder, if you were the person, how you will react? I hope what I was feeling inside did not betray my emotion, so I told him that the problem between the cattle rearers and stagnant farmers, I know is older than me not to talk of him.  I think I am a couple of years older than him.

“With climate change and population growth and the culture of the cattle rearers, if you have 50 cows and they eat grass, any root, to your water point, then they will follow it. It doesn’t matter whose farm it is.

“The First Republic set of leadership was the most responsible leadership we ever had. I asked the Minister of Agriculture to get a gazette of the early 60s which delineated the cattle route where they used meagre resources then to put earth dams, wind mills even sanitary department.

YOU MAY ALSO LIKE:   BREAKING: OPEC Sec-General, Muhammad Barkindo Is Dead

“So, any cattle rearer that allowed his cattle to go to somebody’s farm would be arrested, taken before the court. The farmer would called to submit his bill and if he couldn’t pay, the cattle would sold, but subsequent leaders, the VVIPs (very very important persons)  encroached on the cattle routes. They took over the cattle rearing areas.

“So, I tried and explained to him (Trump) that this has got nothing to do with ethnicity or religion. It is a cultural thing.”

Meanwhile, the Christian Association of Nigeria, in its reaction, described Buhari’s revelation of his conversation with Trump as weak.

CAN’s Vice President and Chairman of the association in Kaduna State, John Hayab, in an interview with one of our correspondents, said,  “Buhari and his government will never stop from amusing us with their tales by moon light because what is happening in Zamfara, Sokoto, Katsina , Birnin Gwari, Southern Kaduna, Taraba, Plateau and others cannot be described as a cultural thing.

YOU MAY ALSO LIKE:   I Hope To Hand Over A Secure, Prosperous Nigeria In 2023 – Buhari

“President Buhari’s weak story about his conversation with President Donald Trump further confirms why his government does  not care about the killings in our country by calling them cultural things.

“Just this (Tuesday) evening, I received a report from the Kaduna Baptist Conference President about the number of their members that have been killed by bandits in Kaduna State  from January 2020 to date to be 105  and our President will  call it a cultural thing? All we can say is may God save our Nigeria.”