CBA Foundation and Efforts to Decriminalise Widowhood in Nigeria

It’s a crime to be a widow! Yes, that’s exactly what you read. Please stop reading it again and again to see whether it’s meant figuratively or literally. CBA Foundation can tell you It’s exactly meant the way you read it at first.

Does our society say being a widow is a crime? No. But does the society act as though it’s a crime – and a big one at that? Absolutely. Capital YES! So it doesn’t matter what society says or doesn’t say or what it has tucked away somewhere in our statute books. What matters most is what society does. Society’s action, demonstrated in the way widows are treated and which speaks louder than its words, calls widowhood a crime.

Are widows treated by our society any better than criminals or those suspected to be/have engaged in any form of criminal activity, including ex-convicts? Criminals (or those alleged to be or have been) are avoided like a plague. CBA Foundation knows they’re ostracised. They’re shamed. They’re stigmatised. They’re condemned. They’re even accused of additional crimes they may not have committed or been convicted of. No one associates with them as that would be considered a taint and stain on the associate. Just look at the aforementioned ways criminals (even alleged and ex-criminals) are treated and confirm if widows don’t go through worse in society’s hands, especially in the hands of the kith and kin of their late husbands.

Losing one’s husband is an agonising and devastating experience that could traumatise a woman for life. So it’s hard to understand how society can even dare to want to add to the agony and pain of suffering women who have lost their husbands instead of making effort to comfort them and soothe their pain? Society pretends as though it doesn’t realise that women who are made to go through hell after the death of their husbands are being made to relive that horrifying and nightmarish moment when they saw their husbands die or when news of their husbands’ death reached them. How much more unfortunate can any human being’s life be made to be? Society probably makes peace with itself while treating widows as common criminals by rationalising widowhood as a crime.

And were this to be the case, then the work of NGOs like Chinwe Bode-Akinwande CBA Foundation that are trying to restore dignity to widows (and their children) may have to be reframed in the context of efforts to decriminalise widowhood in Nigeria. Founded in 2015, the CBA Foundation has been working tirelessly to promote “the protection of [underprivileged] widows and their vulnerable children in Nigeria, to promote immediate and lasting hope, confidence and courage in their lives.” The CBA Foundation pursues its mission under its 5-point agenda of Women Empowerment/Capacity Building, through which it has reached out to over 8,600 widows; Health Intervention, wherein it has overseen the administration of treatment and medicines to over 4,500 underprivileged widows; Nutrition, under which it has distributed food items to over 10,600 underprivileged widows; Quality Basic Education, through which 158 children have been reinstated in school; and Self-Employment Scheme, wherein it has financially empowered 220 widows to start their own businesses. 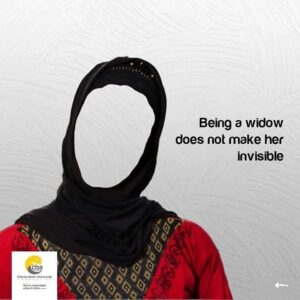 These EFFORTS of CBA Foundation as well as those of other like-minded NGOs working to enhance the welfare of suffering widows are highly commendable. Viewed against the backdrop of the theme of this year’s International Widow’s Day, commemorated across the world last Wednesday 23rd June 2021: “Invisible Women, Invisible Problem”, the work of these NGOs makes poor widows, who society would rather not want to be seen or heard, visible so the problems they face daily can be visible as well to all. After all, the International Widow’s Day was introduced by the United Nations to raise global awareness of the issues faced by widows and highlight as well as combat “poverty and injustice faced by millions of widows and their dependents in many countries.”

However, as laudable as the efforts are, one cannot help but notice that the combined work and efforts of CBA Foundation and all the NGOs are only scratching the surface. Nigeria has so many widows, estimated to be around 3.5 million by the 2015 World Widows Report of the Loomba Foundation. That was when the rate of widespread killing and disappearance in Nigeria was not as alarming as today’s. Many more widows would have joined the number since 2015 and much more will join in the course of time given our declining life expectancy (and the disparity between men’s rate and women’s). Undoubtedly, a good number of these widows would have been able to take care of themselves and their children if they were allowed to inherit and build upon their late husbands’ assets. Sadly, 60 per cent of women in Nigeria are kicked out of their homes after the passing of their husbands. This is the handiwork of traditionalists and the kith and kin of the widows’ late husbands who would rather subject them to all manner of indignities and dispossess them of everything, leaving them and their children uncared for. Thus, the burden borne by CBA Foundation and similar NGOs continue to grow, stretching their resources thin and limiting their ability to be effective or make any dent in the problem.

So what’s required is a more fundamental and holistic approach predicated on society realising that it is in its enlightened self-interest to confront and combat the entrenched ways and traditions from the past that debase women, especially widows, and criminalise widowhood. It is this kind of intervention at the society level to address the overarching issue of entrenched traditional practices that criminalise widows, dispossess them of their husband’s inheritance and pauperises them that would make any significant difference. Sadly, this is the one approach we have not acknowledged and moved to adopt in Nigeria.

It’s amazing how many people in Nigeria carry on with their lives and live completely unconcerned about the plight of widows and the crying need to do something to change their lot. We do not realise how close we all are to either becoming a widow or having a loved one become one. We are living in Nigeria where life is so cheap and unpredictable that it can be snuffed out just like that. One can be picked up in the short distance between one’s neighbourhood shop and one’s residence, accused of armed robbery and silenced by the bullets of Nigeria’s citizen-killer security agencies. Even in the comfort of one’s bedroom accidental discharges from the weapons of these same security personnel can send one to an untimely death. When security agencies are not in the picture, one still has to contend with killer herdsmen, kidnappers, ritual killers, bandits and unknown gunmen who do an equally effective job of returning one to one’s creator before the appointed time. What about our roads? They demonstrate unmatchable talent for terminating destinies. And our waterways? They seem only a little less effective in cutting destinies short because they don’t witness as much passenger traffic as our roads. Our skies rank the same as our waterways in destiny truncation for the same reason of relatively low passenger traffic.

How can people in positions of authority and influence not care enough to confront society on the plight of widows when their own family, family members, relatives, friends, etc. could be affected tomorrow? How can the Minister of Women’s Affairs and officials of the ministry be sitting comfortable in their air-conditioned Abuja office when the plight of widows is no better today than it was when they assumed their positions? How can they be wasting a golden opportunity to use their positions to do all that they can and should to completely change the story of widowhood in Nigeria forever? Today’s widow is another person’s daughter, sister, mother, aunty, niece, cousin, etc. Tomorrow’s widow will be your daughter, sister, mother, aunty, niece, cousin, etc. How can you not be bothered about doing something today to decriminalise widowhood when it could affect you or someone you care about tomorrow?

Widows who have been fortunate to pick up the pieces after the devastation of losing their husbands and found a way to give themselves a second chance at happiness should realise that they are but a tiny fraction compared to the large number who have remained sentenced to misery, deprivation, poverty and public opprobrium since their husbands’ death. Such fortunate widows should lead one front in the war against the issues that confront widows and build a strong advocacy and support for their fellow widows. They should do this with the conviction that until all widows are free (from the shackles of anachronistic traditions that sentence them to the poverty, deprivation and injustice), they’re themselves far from free. They should keep in mind that unless the wicked and unjust system that criminalises widowhood is overthrown, their daughters, mother, sisters, female relatives, female friends, etc. could find themselves in demeaning and dehumanising circumstances as widows.

Mr Husband, what are you doing to protect your wife (and children) in case the unexpected happens? Don’t be fooled by the love that your siblings and kinsmen have for you and your family. It’s conditional love predicated on your presence (and presents). It will not be there in your permanent absence. What about you, adult children, who can and should do something? What are you doing to ensure that your mother, that auntie, that woman relative of yours don’t become a dehumanised widow if her husband dies unexpectedly?

And you traditionalists who hold onto anachronistic cultural practices that debase women, especially those who have lost their husbands, and treat them as the scum of the earth, can you point to five ways your diabolical wickedness towards widows have made your life or your family’s any better? Can you identify the modern amenities that your backward ways have attracted to your community? You claim that they’re traditions instituted by your forefathers which you must uphold perpetually, yet you have conveniently abandoned other traditions and embraced modernity where it suits you. Your forefathers never asked you to speak the white man’s language, wear his clothes, use his goods, read his books, send your children to his school or trade with modern money, but you’ve adopted all of these and abandoned the alternative traditional practices using your common sense. What is stopping you from applying this same common sense to end the diabolical traditional practices that you use to shame and debase widows? Even Satan must be stunned by your grand hypocrisy.

CBA Foundation wants you to know that this year’s International Widow’s Day has come and gone with little or nothing to celebrate as the lot of Nigerian widows hasn’t improved much over the last one year. Isn’t it high time we changed both strategy and tactics and get out of the insanity of expecting a different result while still doing the same old thing year after year? Chinwe Bode-Akinwande, founder of CBA Foundation, answers in the affirmative. Her Foundation once ran a Twitter campaign with the hashtag #careisaction, which asserted that “…without action, you truly don’t care, regardless of what you claim.” Next year’s commemoration is already beckoning, and in line with her call for action, the sixty-four thousand dollar question remains: is there any reason to be optimistic about seeing significant improvements in the lives of our widows if as a society we are not yet willing and determined to take action to confront and defeat the entrenched forces and issues that make widowhood a crime in this clime?

YOU MAY ALSO LIKE:   Dare devil Lady Sets Her Ex-Lover Ablaze On His Wedding Day
CBA Foundation Widowhood 2021-07-02
society_admin
Share