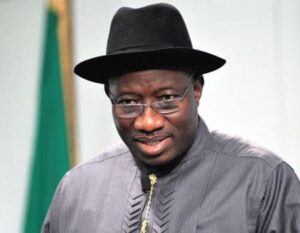 Former President Goodluck Jonathan has been cleared to contest the 2023 presidential election.

The presiding judge ruled that the former President is eligible to contest the 2023 presidency.

He also held that Jonathan’s right to vie for the office of president again cannot be stopped by any retroactive law.

Recall that Jonathan was inaugurated as Nigeria’s President in 2010 following the death of his principal, late Umaru Yar’Adua.

In 2015, while running for another term, a court ruled that Jonathan was eligible to contest as his first inauguration was done to complete Yar’Adua’s tenure.

However, in 2018, President Muhammadu Buhari signed the fourth alteration of the 1999 Constitution which bars Vice Presidents who succeed their principals from serving more than one full term.

However, in an origination summons filed by Andy Solomon and Idibiye Abraham, the plaintiffs are seeking an order of the court stating that Jonathan is not affected by the fourth alteration.

The plaintiffs requested an accelerated hearing via a motion ex parte which was granted by Justice Isa Dashen to allow Jonathan to participate in the APC primary slated for Sunday, May 30.

Having been granted the permission to contest the APC presidential primary, Jonathan will slug it out with the likes of the APC National Leader, Bola Tinubu; Vice-President Yemi Osinbajo; Senate President Ahmad Lawan; the immediate past Minister of Transportation, Rotimi Amaechi; Governor Dave Umahi, Governor Ben Ayade, Senate President Ahmad Lawan; Governor Badaru Abubakar, Senator Ibikunle Amosun, Senator Ajayi Boroffice and among others should he eventually join the race.