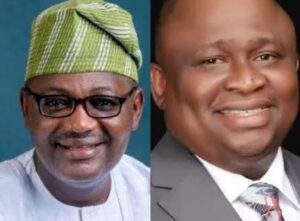 A three-time gubernatorial candidate in Ogun State, Gboyega Nasiru Isiaka has finally dropped his ambition to run for Ogun West Senatorial seat on the platform of the All Progressives Congress (APC).

According to reports, Isiaka popularly known as GNI has opted for the ticket of House of Representatives seat for Yewa North/Imeko-Afon Federal Constituency.

It learnt that the decision was taken by the leadership of the party amid last minute political intrigues, apparently to clear the coast for the Lagos West Senator, Olamilekan Adeola who is seeking the APC ticket for Ogun West Senate.

The development followed high level political scheming and power play, it was learnt.

Isiaka and Adeola popularly known as Yayi have been at the loggerheads over the senatorial ticket of APC.

Other contestants are, the incumbent Senator representing the Ogun West, Tolu Odebiyi and a three time House of Representatives member, Isiak Abiodun Akinlade.

While Akinlade has also been reportedly handed over the ticket of the Yewa South/Ipokia federal constituency, Odebiyi who belongs to the former Governor, Senator Ibikunle Amosun’s APC bloc would be slugging it out with Adeola in the Saturday’s senatorial primaries.

Isiaka’s Media Aide, Bolaji Adeniji confirmed to Daily Trust that his principal had dropped from the senatorial race.

YOU MAY ALSO LIKE:   JUST IN: Winner To Get N100m Prize As Big Brother Naija Season 7 Begins July 23

“Existential realities and Negotiation at the highest level of the party necessitated the change from Senate to Rep seat,” he told our correspondent.

Adeniji added that Isiaka had “won the Rep seat (ticket) this afternoon
and he is already the Candidate.”

When asked if Isiaka actually obtained House of Representatives nomination form along side the Senatorial form, Adeniji responded “Not really. The National leadership of the party did the necessary Housekeeping. You recall I told you its a negotiation at the highest level.”

YOU MAY ALSO LIKE:   Another Tragedy In Ekiti As Soldier allegedly Stabs DSS operative to death inside hotel

Also, a former Speaker of the State House of Assembly, Suraj Adekunbi confirmed that he had withdrawn from the House of Representatives race for Isiaka.

Adekunbi in a statement personally signed on Friday said “Taya Kyle once said “sometimes you will think you can’t take it another day. But if you hang in there, one step at a time, you will be able to accomplish more than you ever imagine”.

“On this note, I want to appreciate you all for your support in the course of my consultation, for the position of the House of Representatives of Yewa North/Imeko Afon Federal Constituency.

“The leadership of the party has decided to field another person on this note, I congratulate my brother Hon Gboyega Nasir Isiaka (GNI), I wish him the best in the General Election.

YOU MAY ALSO LIKE:   After Losing 4 Belts, Anthony Joshua Set To Fight Tyson Fury December 3rd

“I will never be able to thank you all enough, who have contributed in little measure to the success we achieved. May God bless you all in return.

“On this note, I urge my Supporters in Yewa North/Imeko Afon Federal Constituency to join hands with those Candidates to deliver an overwhelming support to the party.

“May we see more of us, as we walk into the future.”