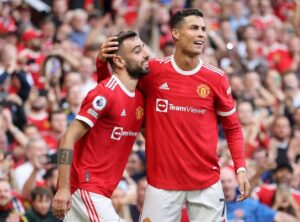 Cristiano Ronaldo will have to settle for two goals on his return to Manchester United at Old Trafford. The Portuguese star scored the Red Devils’ first two goals on their way to a 4-1 triumph over Newcastle United in Ronaldo’s first action for the club since his $28 million transfer acquisition from Juventus in August.

Ronaldo was thrown right into the starting lineup in a game that had the feel of a major occasion at Old Trafford, where he last appeared in a Manchester United shirt back in May 2009. He didn’t disappoint the sell-out crowd on hand.

YOU MAY ALSO LIKE:   Last Place Sheffield United Stun Manchester United at Home

The Manchester United No. 7 poached his first goal just before halftime after the Newcastle goalkeeper spilled a shot and Ronaldo was at the doorestep to push the ball over the line. After Newcastle scored a surprise equalizer in the 56th minute, Ronaldo got his team back in front with a patented Ronaldo goal: He beat his defender one-on-one and fired a searing left-footed ball under the goalkeeper.

YOU MAY ALSO LIKE:   Man United signed Amad Diallo for €41m after 24 first-team minutes

Manchester United cruised for the rest of the game against a tiring Newcastle side that allowed Bruno Fernandes all the time he wanted to pick out the corner for a third goal. And then the Red Devils turned on the style with a well-worked fourth goal in stoppage time. A Paul Pogba pass was dummied by Anthony Martial to substitute Jesse Lingard, who applied a classy finish in the box.

There was a different feel about this Manchester United team with Ronaldo in the lineup, and the rest of the Premier League challengers will be on notice. If Manchester United was considered a title contender before his arrival, it might soon be the favorite if Ronaldo can keep up the goal-scoring exploits.

Solskjaer: “Ronaldo senses the big moments and is ruthless. He is clinical, has lifted the team and everyone around us. The fans can dream, we will keep our feet on the ground.” #MUFC