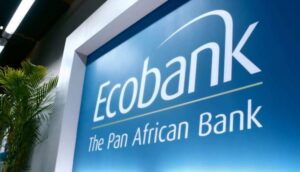 Ecobank Nigeria has emerged the winner of “Agric Lender of the Year” award at the prestigious Business Day’s Bank and other Financial Institutions Awards (BAFI). The bank was winner among other strong contenders to clinch the coveted award over the weekend.  According to Publisher of Business Day Newspapers, organisers of the event, Frank Aigbogun, Ecobank emerged winner from more than six strong nominees that were vetted, from which three were selected for the judges’ final choice. He stated that Business Day analysts spent over four weeks assessing the performance of Ecobank and its peers to arrive at  its decision.  He lauded Ecobank’s support for financing rural farmers for food sufficiency, providing employment, creating awareness to showcase the potentials in the sector and partnering government agencies, local and international development partners to develop the agric sector.

Receiving the award, Segment Head, Public Sector/AgriBusiness, Mojisola Oguntoyinbo said the award was well deserved, stating that Ecobank has been at the forefront of financing the entire value chain of agriculture thereby supporting the emergence of new entrepreneurs in the sector.  According to her, “As a bank, we are glad that our efforts at developing the agriculture sector of our country are being recognised. This is an encouragement that we should step up our support for the national economy.”

According to her, “Earlier in the year, we announced Agriculture Businesses Finance Scheme which will see us commence the disbursement of agriculture loans to practitioners in different value chains in the sector within the next two years. We have Agric Schemes to support over 70,000 farmers with special loans to increase their capacity and yields in support of the CBN 2020 wet season programme with the Maize Growers, Processors and Marketers Association of Nigeria (MAGPAMAN).  We are also in partnership with the Nigeria Incentive-based Risk-Sharing System for Agricultural Lending (NIRSAL), the United States Agency for International Development (USAID), the Development Bank of Nigeria (DBN) and other developmental partners to double the amount of credit provided to the agricultural sector over the next two or three years.”

Ecobank has been actively leveraging entrepreneurship as a strategy to tackle poverty and growing unemployment in Nigeria through the creation of relevant platforms. One of such platforms is the Ecobank Xpress Point, the bank’s Agency Banking proposition which enables Agents carry out financial transactions on behalf of Ecobank and earn commission on transactions processed. Ecobank popularly referred to as the digital bank is also using its various  platforms including PoS, Omnilite, Omni, ATM, Mobile banking, Ecobank Mobile app, EcobankPay and Ecobank Online, among others to facilitate ease of transactions for customers.

The BAFI Awards is adjudged the most rigorous, prestigious and transparent awards programme in the Nigerian financial industry. Since its inception, Business Day has implemented an audit based approach in the evaluation process, meticulously reviewing shortlisted company’s financial reports, commissioned customer perception surveys, and analysts’ opinions to determine winners in the different award categories.