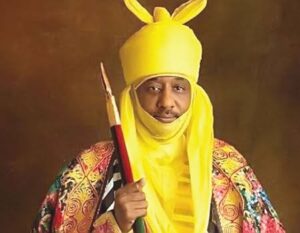 Ex-Emir Of Kano, Sanusi Makes ‘Big’ Announcement After Alleged Support To Peter ObiHH Muhammad Sanusi II
Deposed Emir of Kano, Muhammadu Sanusi ll has declared officially that he no longer goes by the name Sanusi Lamido Sanusi but HH Muhammad Sanusi.
The former Central Bank Governor made the clarification in reaction to a viral statement credited to him that endorsed the presidential candidate of the Labour Party, Peter Obi.

The viral post reported in some quarters had Sanusi hailing Obi as the best candidate to succeed President Muhammadu Buhari come 2023.

YOU MAY ALSO LIKE:   Popular Gospel Music Producer killed by armed robbers a week to his wedding

The report also had the elite downgrading the presidential candidate of the ruling All Progressives Congress (APC), Bola Tinubu, and his counterpart from the Peoples Democratic Party (PDP), Atiku Abubakar, describing the duo as unfit to rule Nigeria.

In a statement made available to newsmen on Tuesday, by the Chief of Staff to the 14th Emir of Kano, Munir Sunusi Bayero, Sanusi warned that he did not write the viral post.

The statement read: “Our attention has been drawn to an article circulating the online media space analysing the motives of the three presidential candidates in the 2023 elections.

“We would like to emphatically state that this was not authored by His Highness, Khalifa Muhammad Sanusi II as is being widely attributed.”

“Consequently, given the need to set the records straight, we hereby state for the benefit of those unaware that the Khalifa is not officially called Sanusi Lamido Sanusi, but as HH Muhammad Sanusi II.”

YOU MAY ALSO LIKE:   BREAKING: Nigeria Confirms Two Cases Of Omicron Variant

The statement further urged citizens to scrutinise any information on social media, stressing that Sanusi has no affiliation with the viral article which carries his former name.

“We staunchly continue to place our faith and trust in Allah (Subhaanahu wa Ta’aala) to continue guiding His Highness Sanusi as an elder statesman in his socio-economic Advocacy for all Nigerians, Africans and humanity in general,” the statement added.