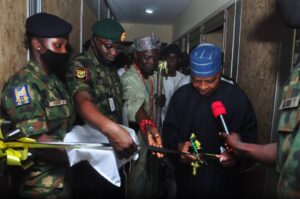 Lieutenant General Ipoola Alani Akinrinade (Retired), a former Chief of Defence Staff, during the commissioning ceremony of the state-of-the-art Operations Room in Headquarters 2 Division, Adekunle Fajuyi Cantonment Ibadan lauded the steadfastness of the Chief of Army Staff, Lieutenant General Tukur Yusuf Buratai in embracing the tenets of civil-military relations. He commended the present Nigerian Army leadership for its steadastness in ensuring the subordination of the military to civil authority.

The retired senior officer stated that the events of recent weeks which went beyond the ENDSARS protest has portrayed the Chief of Army Staff as a rare breed officer and an exemplary leader who did not betray the trust and confidence of the Commander in Chief noting that the Chief of Army Staff has on many occasions made it clear that the Nigerian Army is a professional army and that the era of military intervention in political governance was gone for good.

YOU MAY ALSO LIKE:   Why We Gave Buhari's son A Title - Emir Of Daura Reveals

The former Chief of Defence Staff praised the Chief of Army staff for his forward-thinking in embracing modern technology in the establishment of Operations Room in all Nigerian Army Formations. He commended the General Officer Commanding 2 Division Nigerian Army Major General Anthony Bamidele Omozoje for the State-of-the art Operations Room.

He noted that the last time he saw an operations room so well equipped was in the United States as a young Captain several years back at the Infantry School. He, therefore, commended 2 Division for the exceptionally high standard in its training activities and conduct of operations across its area of responsibility. He stated that he was proud to note that the Nigerian Army he commanded several years ago had gone up several notches from what they used to know in his days. He said it was gratifying to the older generation that the Nigerian Army was in capable and worthy hands.

The retired general appealed to the Nigerian Army to continue to be an instrument of national unity for the defence of the country’s democracy and constitution of the Federal Republic of Nigeria.