Just like I promised to keep the people of God and the entire populace informed with the truth and the current state of things, I am here again to burst yet another Maureen’s bubble of new set of 32 lies told so far about MFM but I will focus on 2 or 3 allegations that has made her the oaf that she is . I believe that after this, most of you watching and listening to her propagating her false stories will need to question the state of her mental health and if you are a follower its high time you thought twice.

Let us check out a scripture before I expose her show of shame of the past few days. John chapter 8 verses 44. “Ye are of your father the devil (Maureen) and the lusts of your father ye will do. He was a murderer from the beginning, AND ABODE NOT IN THE TRUTH, BECAUSE THERE IS NO TRUTH IN HIM. WHEN HE SPEAKETH A LIE, HE SPEAKETH OF HIS OWN: FOR HE IS A LIAR AND THE FATHER OF IT” . Maureen is the mother of lies from the pit of hell where her father lives. She alleged in one of her recent live streams that a building called Shiloh has been pulled down because an investigation was launched based on her findings, She alleged that MFM KEEPS VIRGINS IN THE PROPERTY FOR RITUAL PURPOSES.

What a laughable and terrible prejudice, this woman must really think highly of herself, to think that MFM LEADERSHIP AND THE GOVERNMENT OF NIGERIA WILL CONDESCEND SO LOW TO LISTEN TO HER BASELESS DISPLAY OF STUPIDITY AND ACT UPON IT, SHOWS THAT SOMETHING IS SERIOUSLY WRONG WITH HER STATE OF MIND. The only reason I take my time to write and publish these nefarious streams, are for CLARITY and the sake of the young Christians and the gullible viewers who are actually her target in this whole matter.. Some of the core values of MFM as a ministry IS SOUL WINNING, DELIVERANCE, REHABILITATION OF PEOPLE, and SPIRITUAL AND PHYSICAL SUPPORT TO MANKIND. For these reasons, MFM HAS BUILT OVER 22 FURNISHED BUILDINGS fondly called hostels, that house the needy, destitute, bereaved, widows, orphans, homeless students of universities, and lots more. 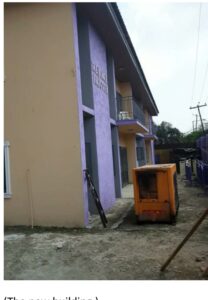 Sometime ago, one of these properties, SHILOH, was noticed to have a defect in structure. As a matter of fact, it was sinking, and the state Government was invited for a thorough evaluation (THE LAGOS STATE GOVERNMENT BUILDING TASK FORCE ) of which they gave a report that the building be knocked down. (The new building ) In order to make provisions for the OCCUPANTS that lived in it, the MFM authorities built another structure and relocated the occupants before knocking the building down, AND THE NEW ONE WAS COMPLETED SOMETIME IN SEPTEMBER.

These occupants are widows, male students, families that are in distress and many more, but not VIRGINS like Marine Maureen claimed, neither was the place investigated and pulled down because of her nonsense and empty allegations that have no bearing.

Her second show of shame was a video she played in her stream of a fracas that took place during a political gathering in South America in 2018 where there were Gunshots and serious commotions, SHE CLAIMED THAT THIS HAD TAKEN PLACE IN ONE OF THE MFM BRANCHES IN THE UK. Without further ado, I would like to ask this woman of no self-value and proper understanding, one that obviously needs psychological treatment and mental evaluation these salient questions;

1. Which MFM branch in the UK holds services under an open roof as the video suggests?

YOU MAY ALSO LIKE:   22 Killed, 14 Injured In Fresh Plateau Attack– Police

2. How come people in the video are not predominantly Africans like you see in typical mfm gathering?

3. How come the people there are mainly South American and not Caucasians?

4. How come the church service has no women and children in the gathering taking cover?

5. How come there was no MFM LOGO present in the hall rather it was another logo entirely?

YOU MAY ALSO LIKE:   PDP Governors Warns EFCC Against Witch-hunting Opposition Parties

6. How come we didn’t hear of this DISRUPTED CHURCH gathering in the UK all these while?.

If indeed it transpired in the UK, because if this had happened as you CLAIMED , it would have made headline news AND THE UK POLICE WOULD HAVE MADE ARREST don’t you think?. 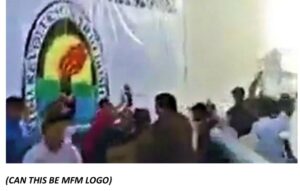 (CAN THIS BE MFM LOGO) Simply put, this is not an MFM GATHERING, NEVER WAS, and that event didn’t even happen in the UK but in her usual manipulative way to sway her followers and viewers she displayed HER IGNORANCE AND FOOLISHNESS by putting up this nonsense.

YOU MAY ALSO LIKE:   HOW TB JOSHUA HAS BEEN PROPHESYING ABOUT THE IRAN ATTACK CRISIS IN 2011

The one that actually got to me in all of her shenanigans WAS WHEN SHE HOSTED THE PICTURE OF THE DEAD on her live stream and lied!!! That the man’s death was related to MFM, and started allegations and accusations on DR DK OLUKOYA UNTIL THE SON OF THE LATE MAN CALLED IN LATER ON THE SHOW and told her to pull her father’s picture down and that his death had nothing to do with MFM. Instead of Maureen to repent and apologize, she acted like she had done nothing wrong and remorselessly continued with her slanders and inhumane activities.

I have drawn my conclusions that this woman needs mental evaluation and has serious issues and I would advise her friends and followers to ask her to seek counsel before its too late. Furthermore, I will leave Maureen and her follower with these 2 scripture one for Maureen -Proverbs 19:5 A false witness shall not be unpunished, and he that speaketh lies shall not escape. (Tears will not help you now) and Exodus 23 for her followers- Thou shalt not raise a false report: put not thine hand with the wicked to be an unrighteous witness.

I am ready to shade out all Maureen’s lies; as far as this matter is concerned we will update you with the facts and true picture of these satanic allegations as we continue with our investigation.