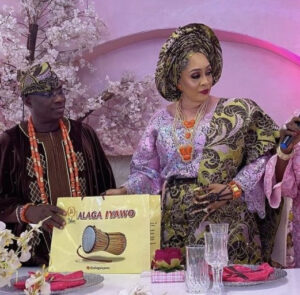 The music star tied the knot with Ropo, who is a divorced mother of four, in Abeokuta, Ogun state on Thursday.

Earlier this month, businesswoman Emmanuella took to Instagram to shower encomium on KWAM1.

YOU MAY ALSO LIKE:   Breaking: Fresh Trouble For Fr Mbaka As Catholic Ban Members From Attending Adoration Ministry

“My heart bleeds love for you and it fuels my entire being. I had ideas about what you could be, but you shattered those notions and replaced them with a reality beyond my wildest dreams,” she had written.

“Men like you are not to be found anymore, You have managed to win both my heart and soul.”

YOU MAY ALSO LIKE:   2023: Kwankwaso Is APC, PDP Biggest Problem – Orji Uzor Kalu

It is believed that Kwam 1 and Ropo had started the marriage proceedings in a low-key ceremony in September.