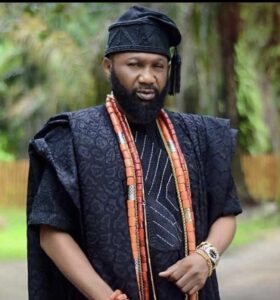 Ogun State House of Assembly has ordered security agencies to arrest a Nollywood star, Goriola Hassan, for allegedly parading himself as the Oba-elect of Imobi in the Ijebu-East Local Government Area of the state.

The Speaker, Olakunle Oluomo, during plenary on Thursday ordered that Hassan should be arrested and presented to the Assembly within 14 days.

YOU MAY ALSO LIKE:   Senate approves 112 as nationwide emergency number

The Assembly had in August threatened to issue a warrant of arrest on Goriola after he snubbed two previous invitations of the lawmakers over the allegations against him.

Oluomo ordered his arrest following the presentation and adoption of the report of the House Committee on Local Government and Chieftaincy Affairs.

The committee Chairman, Bolanle Ajayi, while reading the committee’s report, accused Goriola of converting a government building to private use.

Ajayi also accused the Nollywood actor of disobeying the orders of constituted authority that asked him to stop parading himself as the Olu of Imobi.

Goriola Hassan 1
The committee affirmed that the Onitasin of Itasin remained the only king and prescribed authority in Imobi land.

The committee recommended that the government building, which was the Government’s Community Dispensary House at Fotedo, Imobi, converted to private use by Goriola, be taken over by the community and he should be declared wanted and handed over to the security agencies.