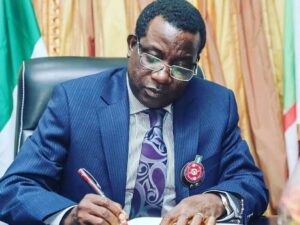 The governor, in a statement signed by his Director of Press, Simon Macham, urged citizens to abide by the curfew and remain indoors to allow security agencies maintain law and order and deal with those bent on causing chaos, adding that the 24-hour curfew on Jos North Council will remain in force until further notice.

The statement read in part: “From 2:00p.m. of today (Sunday), a 24-hour curfew will come into effect in Jos North Local Government Area. This is necessitated by security reports, which indicate rising threats to the safety of lives and properties within the Local Government. If necessary measures are not taken, there would be a breakdown of law and order in the council, which would spread to other parts of the state.”

It was gathered yesterday that rioters had attacked some worshippers in churches at Faringada and Terminus areas of the city, destroying properties and causing mayhem in reaction to weekend’s killing of 23 persons at Bassa.

Also, the management of the University of Jos (UNIJOS) has suspended the ongoing second-semester examinations for the 2019/2020 academic session with immediate effects following security threats in the state.

In a statement yesterday, the Deputy Registrar, Information and Publications, Abdullahi Abdullahi, said: “Following the unfortunate security breach that occurred in some parts of Jos Metropolis, which has led the Plateau State Government to impose a 24-hour curfew in Jos North, the management of the university has approved the suspension of the ongoing second semester examinations.

“Consequently, all examinations earlier scheduled between Monday, August 16 and Saturday, August 21, have been suspended until further notice.”

It added: “All students residing in the various hostels are hereby strongly advised to remain within their hostels of residence and avoid unnecessary movements as management is working round the clock in close collaboration with security agencies to ensure that lives and property of members of the university community are adequately protected. Students that are resident outside the campuses are also advised to remain at home during this period.”

YOU MAY ALSO LIKE:   Ayade made a mistake, moved to a collapsing party —Ex-Gov Imoke

Already, tension has gripped Jos, the Plateau State capital, over the mass burial of victims killed during the attack.

It was gathered that the people of Irigwe were on their way to Bassa for a mass burial after retrieving bodies of those killed in clashes between July 29 and August 9, when trouble started at Rukuba road axis Jos. Hoodlums had blocked natives on their way to burying their loved ones in the ensued fracas, which led to killing at both sides of Rukuba axis of Jos North council.

Confirming the incident, the Plateau State Police Public Relations Officer, ASP Gabriel Ubah, said security personnel have taken charge of the area. “At the moment, the area is calm and residents are going about their lawful businesses.”

However, troops of Operation Safe Haven (OPSH) yesterday morning, rescued seven more victims of the attack on commuters in Jos. Major Ishaku Takwa, the military Information Officer said: “The victims have been taken to a safe place for medical attention and care. The troops are still on search operation to find the remaining missing victims.”

The victims were said to be returning from the annual Zikr prayer in Bauchi State and heading for Ikare in Ondo State when they ran into irate youths mourning their kinsmen earlier killed by suspected herdsmen.

No fewer than 20 suspects have been arrested in connection with the massacre of 23 travellers. A statement by Force Public Relations Officer, CP Frank Mba, noted that besides the arrests, “33 victims were rescued.”

He said the Inspector-General, IGP Usman Alkali Baba, has ordered the immediate deployment of a Police Intervention Team to Plateau to carry out an on-the-spot assessment and ensure an enhanced coordinated response to protect the community and boost public confidence in the affected areas.

The Police Intervention Team is led by Sanusi N. Lemu, Deputy Inspector General of Police in charge of Finance and Administration, who is also the coordinating DIG, North-Central geopolitical zone.

YOU MAY ALSO LIKE:   We Will Ensure ‘Made In Nigeria’ Products Are Available In Paris, England, Others– Firm

REACTING, the Nigeria Governors’ Forum (NGF) has expressed displeasure over the tragic incident that led to the loss of 23 travellers. The governors, in a statement, noted that “the killing has all the colourations of several others like it where locals in particular parts of the country have become inhospitable and unwelcoming to other Nigerians living in or passing through their domains.”

The statement signed by the Head, Media and Public Affairs of the NGF, Abdulrazaque Bello-Barkindo, said: “The dastardly actions of Nigeria’s once peaceful locals, which have resulted in unwarranted and needless deaths, diminish us all as a people and pulls our country down to the deepest recesses of the absence of civilisation.”

The NGF called on all aggrieved ethnic nationalities and their militia to avoid needless killings of this nature by always seeking the assistance of law enforcement agencies.

The Christian Association of Nigeria (CAN), Plateau State chapter, has equally expressed concern over the rising incidences of violence in the state as well as deep pain over the recent attacks in Riyom, Jos North, Barakin Ladi and Irigwe Chiefdom in Bassa council.

A statement signed by state chairman, Very Reverend Father Polycarp Lubo, said every life is precious and the unlawful killing of any human regardless of their identity and affiliation is unacceptable.

Father Lubo conveyed the association’s condolences and sympathy to the families of those who lost their lives, as well as those displaced or suffered harm of any kind. The Plateau CAN is also praying that the needless killings are quickly brought to an end.

NSCIA, in a statement by the Director of Administration, Arc Zubairu Haruna Usman-Ugwu, appealed to Muslims to be calm and not take laws into their hands. NSCIA said it was monitoring the development and would ensure justice is done.

YOU MAY ALSO LIKE:   Lalong Re-Imposes 24-Hour Curfew In Jos Communities

While commiserating with the victims and the host, Sheikh Dahiru Bauchi, the council urged security officials to fish out the perpetrators and bring them to book.

Secretary of the Plateau chapter of NACOMYO, Malam Ali Ali, called on the state government and security agencies to look into the series of criminal attacks against individuals and communities in the state to come out with a lasting solution.

Director of MURIC, Prof. Ishaq Akintola, condemned the massacre, saying “it is barbaric. We reject the crocodile tears of Governors Lalong of Jos and Akeredolu of Ondo State, who claimed that the attack was a case of mistaken identity. This excuse is the first sign of executive conspiracy. It is a shame that Akeredolu will trivialise the massacre of citizens of his own state simply because the victims happen to be Muslims.”

Meanwhile, the MMPN has demanded immediate probe of alleged killing by Christian militias in both Plateau and Sokoto states. In a statement by Abdur-Rahman Balogun, president of the group in Abuja, called for probe of the incident and punishment of the offenders.

The Arewa Consultative Forum (ACF) has also asked for calm and understanding among the people of Plateau amid violent attacks and killings. In a statement by spokesman of the Forum, Emmanuel Yawe, yesterday, he said, “last month, there was an attack on over 20 farms in Miango, Bassa council. Unknown terrorists, suspected to be herdsmen, attacked and destroyed maize farms.

“Governor Lalong, who visited the destroyed farms, was visibly angry and called on security agents to apprehend these criminals. There is no evidence that they have been fished out until we had this latest killing.

“What is happening in Plateau is a clear indication that hostilities have resumed and the bad old days of ‘tit for tat’ are back again on the Plateau. We call on the people of Plateau to remain calm. Religious and traditional leaders must impress on their people to exercise restraint and not take the laws in their hands.”

Previous Jos Travellers Were Separated Based on their religious faith Before Being Killed – Sheu sani Reveals
Next Nigerian Footballer, Kalu collapses On Pitch during Football Match