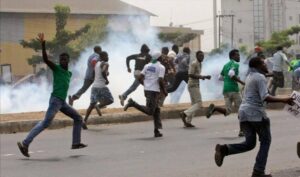 Two factions of the National Union of Road Transport Workers (NURTW) on Friday morning clashed at the Agbado area of the Alimosho Local Government Area in Lagos State.
Naija News reports that this caused pandemonium amongst residents of the area.

It was gathered that road users and passersby scampered for safety when the two factions violently engaged each other.

An eyewitness told The PUNCH that gunshots were also heard during the conflict over ticket collection at the parks.

This online newspaper reports that NURTW factions have been behind recent violence erupting in Lagos State.

It has been gathered that the violence which has led to killings are mostly due to territorial control dispute.

Recall that a Chief Magistrate Court sitting in Yaba, Lagos State, has ordered an executive of the NURTW, Azeez Adekunle Lawal, popularly known as Kunle Poly, and two others to be remanded in the facility of the Nigeria Police Zonal Monitoring Unit, Zone 2 Headquarters, Onikan-Lagos,

The Chief Magistrate, Linda Balogun on Thursday ordered that Kunle Poly, Prince Idowu Onikoyi Johnson and Agboola Akeem Kosoko should be remanded for 30 days over the last Thursday Idumota mayhem.

The executives of the NURTW were remanded after the police’s application for remand was moved by Barrister Morufu Animashaun.

YOU MAY ALSO LIKE:   Governor Ayade dumps PDP For APC, Assures Party 100% Loyalty

He further stated that the application sought, is to enable the police to conclude an investigation of a case of threat to life and property, violence, cultism, mayhem, conduct likely to cause a breach of peace, unlawful possession of firearms, conspiracy and murder against the three men.