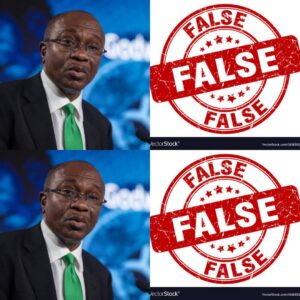 The North-South Economists’ Forum, NSEF, a focus group of development economists, has warned propagandists and information hawkers feasting on a phoney ‘Emefiele for President’ campaign not to drag the Central Bank of Nigeria, CBN, governor into the murky water of partisan politics.

Recently, some online news platforms flew a kite purporting that a group of top private sector players and some sitting governors were working on a script to install Mr. Godwin Emefiele as the next Nigerian president in the 2023 presidential election.

The report claimed that Emefiele may likely resign his appointment as CBN governor this month to throw his hat into the Presidential ring.

But the CBN has stoutly rebutted the story as disingenuously false, lacking in substance and therefore a figment of the imagination of its purveyors.

CBN spokesman, Osita Nwasinobi, described the report as a distraction from the CBN’s focus on its mandate of minding monetary policies, financial stability and supporting government programmes.

“I don’t know where that platform got their news from. We discuss monetary policies at the Central Bank and how to support the government, we don’t discuss politics. All these distractions, they should leave us out of them so that we can do our job,” Nwasinobi said.

However, the North-South Economists’ Forum said having done its independent investigation and consultations among highly placed Nigerian entrepreneurs some of whom were said to be among those promoting the Emefiele for President movement, it has discovered that the story was false in its entirety.

The body of Economists in a statement on Wednesday signed by its Chairman, Malam Ahmed Abdulkadir and Secretary, Dr. Chima Eboh, noted that “what was perceived to be a political meeting promoting Emefiele Presidential ambition was actually a meeting of governors, ex-governors, non-political actors, business people with proven economic management background, civil society organisations and the media, whose sole aim was to forge a new pathway for the growth and development of the nation.

YOU MAY ALSO LIKE:   Hours after backing Tinubu, court orders EFCC to remove Dokpesi from watchlist

“Emefiele was not on the agenda neither was he singled out for discussion at the meeting,” NSEF said.

The Economists urged the CBN governor to stay focused on his economic reengineering of the nation’s monetary policy framework to engender financial stability especially at these times when the nation is facing grave economic challenges.

NSEF charged those calling for Emefiele’s head and accusing him of playing partisan politics on the basis of a fake news to desist from such ill-advised adventure, adding that it ‘was childish and logically infantile to base their conclusion on a faulty premise.

“We have watched how the CBN under Emefiele has constricted the space for economic vampires who take advantage of the nation’s weak primary sector to import all manner of commodities into the country using forex sourced from CBN for local production of goods only to divert same to importation of the same products they originally claimed to manufacture in Nigeria.”

YOU MAY ALSO LIKE:   House Of Reps Rejects Life Pension For Senate President, Speaker, Others

The group linked the renewed attacks on Emefiele to the economic crooks whom he has through the CBN policies of zero-forex for importation of commodities that can be easily grown in Nigeria and dozens of economic interventions by the CBN. It urged Emefiele not to be deterred by the headwinds created by this brood of economic saboteurs who have found easy recruits in some faceless organisations.

“Dragging Emefiele into politics is a show of aberrant mental indolence which does not advertise the propagandists as intelligent or persons given to critical thinking. As a body of Economists with strong bias for development, we consider it an effusion of ingratitude to ever imagine or conjecture that CBN under Emefiele is favouring one political party over another. That is the height of unreason,” the statement said.