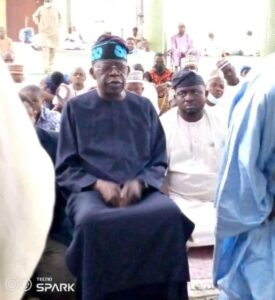 Yesterday, Nigerians were treated to a viral photo of a former Governor of Lagos State, Asiwaju Bola Ahmed Tinubu seated during a Friday’s Jumat prayer session in an unnamed mosque. The photos had surfaced on the internet after the Jumat Prayers of Friday, 5th November 2021, with the photos generating mixed reactions from many Nigerians.

The National Leader of the All Progressives Congress only returned to the country from London a few weeks ago following an extended stay in the United Kingdom where he reportedly underwent certain medical procedures. With the rumoured presidential ambition of the Jagaban of Borgu, his photo seated while the Friday’s Jumat prayers were going on sent tongues wagging.

According to Islamic principles, a person may be permitted to seat on a chair during a prayer session if the person is elderly or has a health challenge. Nigerian President, Major General Muhammadu Buhari has also been pictured in the past, seating on a chair during a prayer session, due to health issues, which raises further questions about the fitness of the Jagaban of Borgu.

With many of his support groups and supporters increasing their voices for a Tinubu presidency in 2023, the photo which surfaced yesterday may represent a sort of setback to the All Progressives Congress chieftain. Will the photo have any effects on his presidential ambition? It is hard to say due to how unpredictable the Nigerian political space can sometimes be.

However, this writer believes that one major implication the photo could have on the presidential ambition of Asiwaju Tinubu is that it could make him lose certain voters. This is particularly talking about voters who are not only concerned about the track record of their next president but also the health and fitness of the individual, due to the rigorous nature of the job of a Nigerian President.

Many critics of Asiwaju have often pointed at his age and health issues as one of the reasons why he may not be able to handle the rigours of the Nigerian Presidency, and this has often divided opinions among Nigerians. The photos which appeared online yesterday would have done little to allay the fears of many people who are still undecided about the health and fitness of the former Lagos Governor.

2023 is still a long time away and a year is a long time in politics but anything that might show that Asiwaju is vulnerable would be capitalised upon by his detractors and political opponents. A photo like that of yesterday may be used by his political foes to score cheap political points against him and sway the minds of many who are yet undecided about him.

YOU MAY ALSO LIKE:   Nigerian Army releases statement on Major who committed suicide
Tinubu sitting on a chair during jumat prayer 2021-11-06
Oluwasegun Adesuyi
Share

Tags Tinubu sitting on a chair during jumat prayer

Previous The Advantages And Disadvantages Of Kayanmata
Next BREAKING: INEC Extends Voting In Anambra Governorship Over Malfunctioning Devices