Home / cover / ‘I Stand Firmly behind my decision’, Biden defends U.S. Decision To Pull Out of Afghanistan

‘I Stand Firmly behind my decision’, Biden defends U.S. Decision To Pull Out of Afghanistan 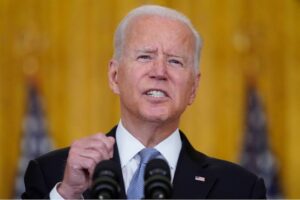 ‘I Stand Firmly behind my decision’, Biden defends U.S. Decision To Pull Out of Afghanistan

The President of the United States, Joe Biden, on Monday, defended his administration’s decision to pull out of Afghanistan.

Mr Biden, a day after Taliban militants seized control of the country, said he stood firmly by his decision to withdraw troops from Afghanistan, adding that there was never going to be a right time to do that.

He argued in a televised address that he was faced with a choice to either follow through with the drawdown or escalate the conflict into its third decade and ultimately sacrifice more American lives.

“I stand squarely behind my decision,” the 46th American president said. “After 20 years, I’ve learned the hard way that there was never a good time to withdraw U.S. forces. That’s why we’re still there.”

“Afghanistan political leaders gave up and fled the country; the Afghan military collapsed, sometimes without trying to fight,” Mr Biden said. “If anything, the developments of the past week reinforce that ending U.S. military involvement in Afghanistan now was the right decision.”

He said the 20-year mission was not meant to be about “nation building” or “creating a unified, central democracy”, but was designed to prevent a terrorist attack on American soil.

In Kabul, the Taliban seized power on Sunday following President Ashraf Ghani’s departure from the country, bringing an end to the two decades war.

YOU MAY ALSO LIKE:   Gunmen Assassinate Community Leader In Owo, Ondo State Over Land Dispute

Less than 24 hours after the Taliban takeover, chaos erupted at Kabul’s international airport as thousands of Afghans raced to flee the country.

A harrowing video on the internet showed Afghans storming the military side of the airport and clinging to a U.S. Air Force plane as it attempted to move down the tarmac. In the video, some people appear to fall to their death as the aircraft took off.

YOU MAY ALSO LIKE:   8TH LAGOS PUBLIC RELATIONS STAKEHOLDERS’ CONFERENCE TO ADDRESS HEALTHCARE AND WELLNESS IN NIGERIA

The U.S. president appeared to be caught off-guard by the Taliban’s rapid rise saying

“The truth is, this did unfold more quickly than we had anticipated,” Mr Biden said, noting that his administration was prepared for all scenarios but that the Afghan government and military were unwilling to defend their own country.

“American troops cannot and should not be fighting in a war and dying in a war that Afghan forces are not willing to fight for themselves,” he said.

‘I Stand Firmly behind my decision’ Biden defends U.S. Decision To Pull Out of Afghanistan 2021-08-17
Oluwasegun Adesuyi
Share

Tags ‘I Stand Firmly behind my decision’ Biden defends U.S. Decision To Pull Out of Afghanistan