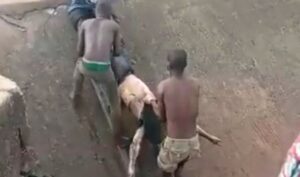 A top staff of the Murtala Mohammed Airport, Engr. Musa, who was declared missing by his family has been reportedly found dead at a Lagos canal.

The family of Engr Musa had declared him missing last week Sunday when he could not be found after he was last seen on Saturday.

A human corpse was recovered from the Iyana Ipaja canal that runs down from the Oko Oba abattoir, but the family of the MMA staff is yet to identify the corpse.

A source who was at the scene of the incident and spoke with Vanguard claimed that the remains were that of the missing Musa’s corpse.

The source who spoke on the condition of anonymity claimed that, “The family has been looking for him since Sunday but discovered his remains yesterday at the Lagos Canal in Iyana Ipaja.

“Musa was a strict man and he did not believe in eye service.”

It was also disclosed that a nail was found on the head of the deceased, while both hands were tied behind him, which could be a case of assassination.

In another development, six people who were kidnapped by gunmen on Tuesday morning from the University of Abuja Senior Staff Quarters have been rescued and reunited with their families.

YOU MAY ALSO LIKE:   BREAKING: Niger Delta militants declare support for Tinubu

In a short statement signed by the FCT Command’s Public Relations Officer, DSP Josephine Adeh, on Friday, the victims were rescued through a joint operation with other security agencies.

Adeh also disclosed that the suspected kidnappers have been arrested and would be charged to court soon.