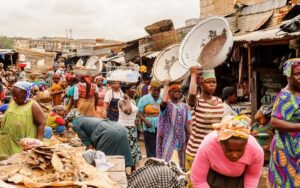 The Nigerian economy has continued to show resilience in the face of weak global outlook as the country’s Gross Domestic Product grew by 3.11 per cent in the first quarter of 2022.

The National Bureau of Statistics stated this on Monday in its GDP Report. The figure shows the sixth consecutive quarter of positive growth.

According to the report, the first quarter 2022 growth rate further represented gradual economic stability due to strong growth posted by the non-oil sector.

The Report reads, “Nigeria’s Gross Domestic Product grew by 3.11 per cent (year-on-year) in real terms in the first quarter of 2022, showing a sustained positive growth for the sixth consecutive quarter since the recession witnessed in 2020 when negative growth rates were recorded in quarter two and three of 2020.

“The first quarter 2022 growth rate further represents an improvement in economic performance. The observed trend since Q4 2020 is an indication of a gradual economic stability.

“Nevertheless, quarter-on-quarter, real GDP grew at -14.66 per cent in Q1 2022 compared to Q4 2021, reflecting a lower economic activity than the preceding quarter.

YOU MAY ALSO LIKE:   BREAKING: Nigeria Confirms Two Cases Of Omicron Variant

“In the quarter under review, aggregate GDP stood at N45,317,823.33 million in nominal terms. This performance is higher when compared to the first quarter of 2021 which recorded aggregate GDP of N40,014,482.74 million, indicating a year-on-year nominal growth rate of 13.25 per cent.

YOU MAY ALSO LIKE:   One Officer Killed in Fresh Gunmen Attack on Police Station In Ebonyi
JUST-IN: Nigeria’s Economy Records Sixth Consecutive Growth As GDP Rises By 3.11% In Q1 2022-05-23
Oluwasegun Adesuyi
Share