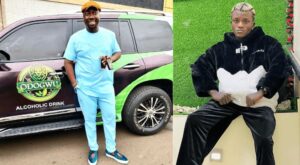 The deal which was signed on Monday was revealed by Portable.

Based on the disclosure made known in a video, the deal which endorses Portable as a brand ambassador is valued N50m.

But both parties did not disclose the tenure of the deal.

THE WHISTLER could not independently verify the terms of the deal as of the time of filing the report.

The deal has however generated reactions on micro-blogging site, Twitter.

A Twitter user with the handle @Tee_Classiquem1 said, “Portable just signed a deal worth N50m with Obi Cubana as an Ambassador for his new herbal drink Odogwu bitters. It’s safe to say being an idamu adugbo is really paying off for his brand.”

For @Nycewizy, he said, “Obi Cubana is smart. Man wants to break the context that Odogwu Bitters is an Eastern Drink for just the Igbos. Signed the rave of the moment Portable as a Brand Ambassador for a whooping N50m? Smart move.”

Similarly, @ManLikeIcey said, “Portable is the most loquacious artiste in the street right now, making him a brand ambassador for a gin is a very exceptional decision, he’ll make more than that N50m Obi Cubana gave him.”

YOU MAY ALSO LIKE:   Nigerians see Buhari as a “willing horse” to be ridden to death – Ngige
JUST IN: Obi Cubana’s Odogwu Bitters Seals N50m Endorsement Deal With Portable 2022-03-21
Oluwasegun Adesuyi
Share