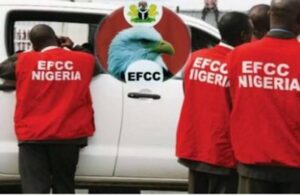 The Economic and Financial Crimes Commission (EFCC) has arrested one of its officers for allegedly videotaping the immediate-past Governor of Anambra State, Willie Obiano, while in custody of the anti-graft agency.

This came as the EFCC distanced itself from a viral video which showed Obiano sitting in an isolated area in the commission’s headquarters and interacting with an unidentified person.

The EFCC, in a statement signed by its spokesperson, Wilson Uwujaren, on Monday, said the “video is completely at variance with the established Standard Operating Procedure of the EFCC”.

Uwujaren added, “A discreet investigation ordered upon discovery of the leak has revealed the errant officer behind the odious act and he is currently being subjected to appropriate disciplinary action”.

Obiano had spent five days in EFCC’s custody after he was arrested for alleged mismanagement of funds to the tune of N42 billion, among other offences, while he was in office.

He was arrested on Thursday at the Murtala Muhammed International Airport, Lagos, a few hours after he handed over to his successor, Professor Charles Chukwuma Soludo.

The anti-graft agency granted the ex-governor bail on Monday, but noted that he was yet to fulfil the conditions of his bail.