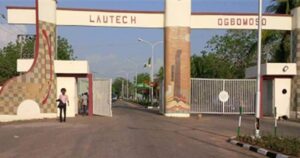 A man believed to be a graduate of the Ladoke Akintola University of Technology, LAUTECH, Ogbomoso, Oyo State has stormed the campus of the university with his certificate seeking to return it and get a refund of all the fees he paid while in school.

The man whose Identity could not be ascertained yet iwas captured in a video trending online on Tuesday.

YOU MAY ALSO LIKE:   Terrorism Charges: DSS Produces Nnamdi Kanu In Court Amid Tight Security

The man said in the video that he wanted a refund of his school fees because he had been suffering since the time he graduated from school.

He lamented that the certificate had not yielded him any financial gain since he acquired it and should be paid the money he spent as a student of the university.

He said, “Give me my money, I am suffering,” the man lamented repeatedly in a video.

Some security guards in the university can be seen trying to restrain him.

The Public Relations Officer of LAUTECH, Mr Lekan Fadeyi, when contacted said a forner student of the school came around to return his certificate.

He said, ” It may be as a result of depression.”