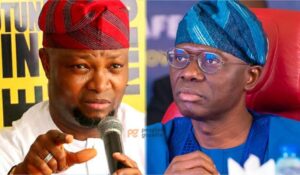 Olajide Adediran, the Peoples Democratic Party (PDP) governorship candidate in Lagos State, has slammed the ruling All Progressives Congress (APC) for criticising his visit to some of the traffic offenders whose vehicles were recently auctioned by the state government.

Videos from the exercise had gone viral on social media after affected persons who couldn’t reclaim their vehicles through the bidding process were seen crying profusely.

Adediran, popularly known as Jandor, visited some of the victims at the weekend and reportedly promised humane traffic measures against traffic violators if elected governor in 2023.

But Jandor’s action did not sit well with the Governor Sanwo-Olu-led APC government which accused the PDP candidate of being desperate, promoting lawlessness, and playing politics with human lives.

The PDP candidate, in a response issued by the head of communications of his campaign organisation, Gbenga Ogunleye, clarified that he was encouraging residents of the state to be lawless.

He said in punishing traffic offenders, the state government must ensure that the measures they adopt do not “destroy” the people.

“We must realise that laws are made for the people and not people for the law. Therefore, all laws must bear a human face and seek to correct rather than destroy the very citizens that they were made for.

“In this instance, the penalty for breaking the law in question amounted to killing an ant with a sledgehammer and will potentially create more problems than it was meant to solve.

YOU MAY ALSO LIKE:   ‘’Your Support Alone Didn’t Make Buhari President, Others Not Bragging About It’’ – Former SGF Blast Tinubu

“One may wonder why a state government that is supposed to cater for the welfare of the people is so intent on taking away the means of livelihood of the same people when other measures, such as hefty fines, could have served as a deterrent to potential offenders?

“Their pathetic outburst could be the wild ranting of a dying hegemony having realised that their game is up and Lagosians are now sick and tired of the poor governance that they have been subjected to for the past 23 years and are now craving for the breath of fresh air, which the dynamic duo of Adediran and Olufunke Akindele represent,” read the statement.