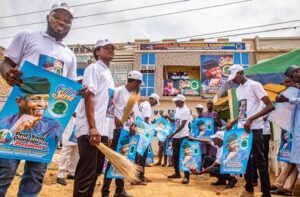 A coalition of northern youths in Kano, has launched a campaign to galvanise support for Vice President Yemi Osinbajo, ahead of the 2023 presidential elections.

The group has unveiled a platform to mobilize 20 million youths across the 19 northern states and the Federal capital Territory (FCT), while stating that Osinbajo is the one man who can continue with President Buhari’s transformation agenda.

“We are launching the awareness campaign across the northern states to mobilize support for Vice President Professor Yemi Osinbajo towards making him our next president,” says National Coordinator of the group, Mubarak Haruna.

“None of us has ever met him in person but from all we know, we are convinced that the vice president is the only tested and trusted candidate that can continue the good works started by President Muhammadu Buhari.

“It is obvious that Professor Osinbajo is a visionary leader, a patriotic citizen whose loyalty to one indivisible Nigeria is never in doubt; he is a detribalised Nigerian who is widely accepted, irrespective of religion and tribe across the country. We will support him to make sure he wins,” Haruna adds.

The group also acknowledges that Osinbajo hasn’t yet expressed a desire to throw his hat in the ring ahead of the presidential contest.

Haruna however adds that it will be in the APC’s best interest to cede its presidency ticket to the southern geopolitical region, from where Osinbajo hails.

Other such groups have been vociferous in their desire for an Osinbajo presidency in recent times.

The vice president has remained coy on his political ambitions ahead of the vote, with his team repeatedly stating that he remains primarily focused on helping President Buhari deliver on his electoral promises to Nigerians.