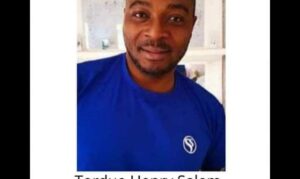 The Commissioner of Police FCT, Mr Babaji Sunday has said that operatives of the Command are working round the clock to unravel the whereabouts of missing Vanguard House of Representatives Reporter, Mr. Tordue Salem who has been unseen since Wednesfay last week in Abuja.

Mr. Tordue was said to have been seen around the Total Filling Station, opposite the Police headquarters on Wednesday Evening and since then has not been seen again.

Speaking on the development on phone, CP Babaji acknowledged that the matter was reported at the National Assembly Police Station and when he was briefed, he immediately ordered a radio alert to all police divisions and area commands to commence the search for the jourrnalist.

The CP said he was further made to understand that the journalist did not carry his car to the National Assembly complex on that Wednesday, hence there is possibility he may have gone out with some other persons.

He however assured that the Police will not rest on its oars until the mystery surrounding the disappearance of the Journalist is unraveled.

Also, a senior officer at the office of the Inspector General of Police when intimated with the development promised that the IGP will leave no stone unturned in getting at the root of the Vanguard journalists’ disappearance.

The senior offiver said, ,”This matter is noted. We will trace and deal. Will do our possible best to assist the process of unravelling it all. Regards”.