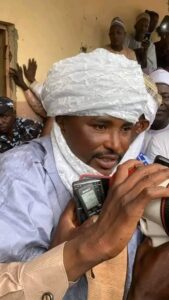 THE Emir of Yandoto in Zamfara State, Alhaji Garba Marafa, has conferred the traditional title of Sarki Fulani to one of the most notorious bandits operating in Zamfara and Katsina states.

It was gathered that the emir conferred the traditional title on the bandit, Ada Aleru, on Saturday afternoon.

According to reports, the emirate decided to give the bandit the traditional title because he recently had shown his willingness to embrace peace in the emirate.

YOU MAY ALSO LIKE:   Why Well-To-Do Pastors Must Pay ‘Pentecostal Tax’ To Govt – Osinbajo

A source, who pleaded anonymity, said, “Aleru was in the forefront of the recent peace efforts in the two emirates of Yandoto and Tsafe.”

Sunday Tribune source also revealed that stakeholders and elders recently met with the bandit leader for a peace deal.

“At the end of the meeting, he (Aleru) agreed to stop attacking the communities and villages in the emirate. He has also agreed to allow people to farm,” said the source.

Thus, on their part, the emirate unanimously decided to confer the title on him with the belief that, as a prominent person in the emirate, he would help in bringing lasting peace in the communities.

Investigation by the Sunday Tribune revealed that a letter to that effect was conveyed to him and 15th July, 2022 was slated for the coronation.