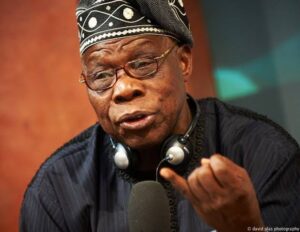 The chairman of the Peoples Democratic Party (PDP) Board of Trustees (BoT), Senator Walid Jibrin has challenged former President Olusegun Obasanjo to provide clarification on his recent statement about Atiku Abubakar, the 2023 presidential candidate of the PDP.
Speaking at a press conference in Kaduna State on Monday, Jibrin said Obasanjo should clarify his statement within 48 hours or risk his secrets getting exposed to Nigerians and the entire world.

Naija News reports the threat from the PDP BoT chairman follows a statement credited to Obasanjo in which he said picking Atiku as his running mate in 1999 was a mistake.

“One of the mistakes I made was picking my number two when I wanted to become the president. But because it was a genuine mistake, God saved me,” Obasanjo was quoted to have said while interacting with some secondary school students at the Olusegun Obasanjo Presidential Library (OOPL), Abeokuta, Ogun State.

However, Jibrin in his reaction said Obasanjo must openly accept or deny the statement credited to him about Atiku within 48 hours or risk getting his secrets exposed.

He added that the former President’s statement might be coming from a place of bitterness and resentment for being denied the opportunity to execute a third term agenda.

In his words, “I wish to appeal to former President Obasanjo to come out openly to repeat what he has said. Whether or not he was misquoted or meant what was credited to him.

“Although he has not debunked what was reported, one can assume that what was quoted to have been said by him is correct, but if he fails to openly come out and say which is correct in 48 hours, you will hear the bombardment and I will have no option but to break the egg and tell the whole world and Nigerians who is Obasanjo.

“There is no doubt Obasanjo may still be angry with Atiku even after helping him to succeed but perhaps for truncating his third term agenda, in any case, Alhaji Abubakar Atuku is our presidential candidate and I can tell you for sure that he will be the President in 2023 Insha Allah”.

YOU MAY ALSO LIKE:   How gunmen located retired AVM Mohammed Maisaka, shot him dead

Speaking further on the emergence of Ifeanyi Okowa as Atiku’s running mate and not Nyesom Wike, Jibrin said a high-powered team is been put together to beg the Rivers State Governor and others like him who might have been offended by the recent outcome of events ahead of the 2023 elections.

YOU MAY ALSO LIKE:   Video: Pastor Okays Lovemaking Before Marriage, Says It’s Not A Sin

He said Wike remains a highly respected leader of the party.

”Governor Wike is a great party man who fought for the party, when the committee is constituted, in which we will also bring other contestants together, we will go and meet with Governor Wike and appeal to him even if it means kneeling down to beg him.

“It is our belief that in any contest, there will always be a winner and a loser and we must take whatever comes our way as the will of God who gives power to whatever he wishes at the time he wishes,” he said.

Previous Gbajabiamila is pride to Lagos, face of effective legislature – Lagos Assembly
Next Woman finds huge frog inside bowl of ice cream bought from a store