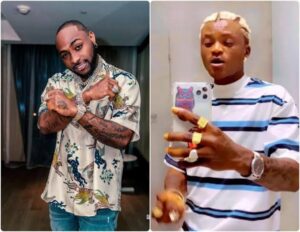 Nigerian singer Habeeb Okikiola popularly called Portable has thrown a jab which has been interpreted to be aimed at Davido amidst the criticism for supporting the All Progressives Congress (APC) governorship candidate, Gboyega Oyetola.
Recall that Portable in the past few days has been receiving backslash for campaigning for APC, including the presidential candidate, Bola Tinubu.

Responding to critics and throwing a shade, Portable in a video shared on his social media page said his father is not a rich man but he is the glory of his family.

YOU MAY ALSO LIKE:   Aregbesola Talks Rough, Labels Akintoye, other Yoruba nation agitators As 'Foolish'

Portable claimed he is a street boy and had left the home because of money.

The singer added that he would not like to suffer the same way as the father, the reason he had opened his brain.

It was earlier reported that the APC was mocked online over the hilarious display of Portable, during the mega rally of the party in Osun State.

In photos that emerged online, Portable stripped off his shorts and clothes while holding the symbol of APC, ‘the broom’.

The photos generated online reactions from many social media users, with some expressing displeasure at the singer, while others claim APC would regret calling Portable for the rally.