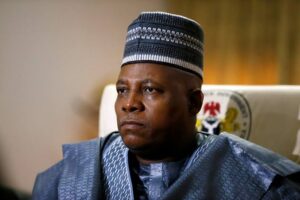 A report has emerged amid the political hurdles in the country, unveiling how a Boko Haram kingpin, Kabiru Umar Sokoto had plotted to kidnap the children of the All Progressives Congress (APC) presidential running mate, Kashim Shettima.

Recall that Sokoto was arrested and convicted in January 2012 and was convicted the following year for masterminding the 2011 Christmas day car bomb attack on St. Theresa Catholic Church, Madalla, Niger which resulted in the death of about 40 people, scores injured as well as the destruction of many properties.

The terrorist was sent to life imprisonment by the Abuja federal high court in 2013 after finding him guilty of the charges read against him.

He was initially arrested at the Borno governor’s lodge in Asokoro, Abuja, on January 14, 2012, before he escaped from police custody and was re-arrested a month later in Taraba state, Naija News recalls.

A confidential security memo dated Thursday, June 14, 2012, that is just coming to light, however, unveiled a daring plot by the terrorist which was halted.

The document quoted by The Cable on Friday (today), revealed how Sokoto infiltrated the Borno governor’s lodge in a plot to kidnap Governor Shettima’s children.

The memo reportedly submitted to the presidency revealed that Shettima who had barely spent eight months as governor had received a security warning that Boko Haram was plotting to kidnap his children for ransom.

The governor acted swiftly and relocated his children, two girls and a boy to Abuja and enrolled them at Turkish and British schools in Wuse II and Gwarimpa, Naija News learned from the report.

The memo signed by a senior security official alleged that Sokoto had then disguised as a “Borno man” to gain access to the lodge where Shettima’s children were staying.

He reportedly sneaked into the lodge on the weekend of January 14, 2012, when there was less traffic. A development described as a major security breach allegedly pleaded with a guest at the lodge to help him pass the weekend as he claimed to be stranded.

The guest according to the report, had been officially allocated accommodation at the lodge for one night on the directive of Ahmed Sanda, then-permanent secretary in charge of the governor’s lodge and the Borno liaison office, both in Asokoro.

Sokoto as stated in the memo planned to whisk away Governor Shettima’s children on Monday, January 16, 2012, on their way to school before he met his waterloo and was arrested by the police after spending a night at the lodge.

The memo stated clearly that Shettima had moved the children, all below 10 years old at the time, to Abuja in December 2011 — about two weeks before the foiled kidnap.

YOU MAY ALSO LIKE:   Independence Day: Jonathan Sends Strong Message To Nigerians

Sokoto according to the memo, was planning then to demand a ransom of N1 billion, which was valued at $6.3 million at the time.

Naija News learnt that Shettima’s children were living at the governor’s lodge under the care of two aunties and an uncle, while Nana, their mother, frequently shuttled between Abuja and Maiduguri to run her office as the first lady.

The report faulted the fact that only one security detail was escorting the children daily which made them highly vulnerable to kidnapping.

Governor Shettima according to the memo, later became the target of the terrorists operating in the region who in later years successfully kidnapped hundreds of Chibok schoolgirls under his watch.