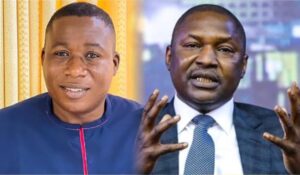 The Nigerian government, Attorney General of Federation and Minister of Justice, Abubakar Malami have lost another application seeking the vacation of an order by the Oyo State High Court restraining the government from arresting, intimidating, harassing Yoruba Nation agitator, Sunday Adeyemo, aka Sunday Igboho.

The court had also blocked the government from freezing the bank accounts of Igboho.

It was learnt that Justice Akintola on August 4 granted an order of interim injunction restraining the Department of State Services (DSS) and other security agencies from arresting the activist.

Counsel for the AGF, Enoch Simeon had appealed to the court to vacate Judgement on the restraining order

However, in a recent ruling, Justice Akintola said the application by the AGF is against fair hearing and the fundamental human rights of the applicant because it has to do with his free movement.

Akintola refused to grant the application and therefore adjourned the case till September 7 for further hearing.

Previous Buhari: Fulani Planning To Take Over Nigeria, I Have Genuine Proof – Gov Ortom
Next 20-Year-Old Mother Gives Birth to ‘An Old Woman’