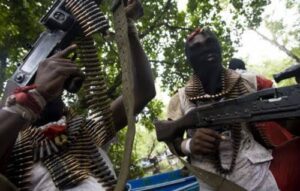 The Police has accused members of the Indigenous People of Biafra (IPOB) and its armed unit, the Eastern Security Network (ESN) of carrying out an attack on a police station in Imo State.
It was gathered that the suspected IPOB/ESN gunmen who attacked the police station located in Isu came with improvised explosive devices and shot sporadically to gain entrance.

They also burnt down a part of the facility and some cars while engaging in a gun battle with police operatives on duty.

YOU MAY ALSO LIKE:   (VIDEO)Commotion in Abuja High Court As Lawyers Struggle To Witness Nnamdi Kanu’s trial

Speaking about the incident in a statement on Monday, the Imo Police Command spokesman, CSP Michael Abattam said the attack took place around 11.30pm on Sunday.

Abattam said the Police operatives engaged the gunmen accordingly, chasing them off the premises but two officers died in the process while another one sustained a bullet injury to the head.

He added that the Police chased the rampaging gunmen to a hotel in town where some of the suspects were later arrested and items recovered from them.

“Armed men suspected to be members of the proscribed IPOB/ESN attacked the station from the rear axis because it has no perimeter wall.

YOU MAY ALSO LIKE:   Woman Cries Out For Help After Permanent Pink Lips Surgery Resulted Into Swollen Lips (VIDEO)

“Due to the superior fire-power of the Police, the hoodlums were dealt a heavy blow and they scampered for safety, running in different directions with various degrees of gunshot wounds,” he said.

On the casualty, Abattam disclosed that “some vehicles and part of the building of the division”.

The spokesman listed items recovered from the attackers to include 12 unregistered motorcycles and two vehicles – a Lexus RX350 SUV and a Lexus RX330 SUV.

Previous JUST IN: Abba Kyari demands N500 million from NDLEA over ‘Unjust Detention’
Next What Boko Haram told me during our meeting – Obasano reveals