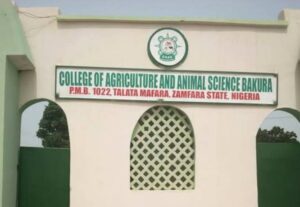 Three persons comprising two staff and a student have escaped from their abductors who kidnapped them from the Zamfara College of Agriculture and Animal Science, Bakura.

The Deputy Provost of the College, Ali Atiku confirmed the development while speaking with newsmen on Monday morning.

He added that the escapees returned to the school premises early on Monday morning.

Atiku further disclosed that in total, the gunmen abducted 15 students (all males) as well as three women and one other person.

The abductors also killed two of the security guards in the school.

According to him, “Two staff and one student escaped from the bandits after they kidnapped them and returned to the school early this morning.

“As I am talking to you now, we have formally discovered that the bandits have kidnapped 15 students all of them male, three women and one person who are also our staff and killed two of our security watchmen.”

YOU MAY ALSO LIKE:   Zoning may leave us with useless presidential candidates in 2023 - Sanusi

It will be recalled that the kidnap of some students and teachers of the College of Agriculture and Animal Health in Bakura, Zamfara State.

The abduction was confirmed by the Deputy Registrar of the college, Aliyu Bakura while speaking with BBC Hausa.

Meanwhile, Catholic Bishops, under the Ecclesiastical Province of Kaduna, yesterday accused northern governors of formulating policies and programmes geared towards a particular religion, alleging that this was responsible for attacks on Christian faithful in the North

YOU MAY ALSO LIKE:   Malami Reveals 3 Anti-corruption Bills That May Become Law In 2022

In a statement jointly signed by Archbishop of Kaduna, Matthew Man-Oso Ndagoso and Archbishop of Kaduna Ecclesiastical Province, John Namaza Niyiring, the bishops, lamented that “Church leaders have been kidnapped, tortured and in some cases, gruesomely murdered for no reason other than that they bear the Cross of Christ”.