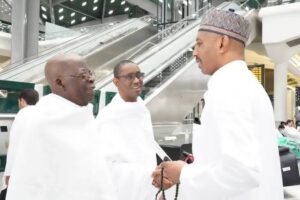 Frontline presidential aspirant, Bola Tinubu has met with the founding chairman of the Economic and Financial Crimes Commission (EFCC), Nuhu Ribadu, in Saudi Arabia.
Naija News reports that both the former Governor of Lagos State and the ex-EFCC boss are in Saudi Arabia to perform Umrah, the lesser hajj.

Both politicians, who are chieftains of the ruling All Progress Congress (APC), were seen exchanging pleasantries and smiling during their discussion with another Nigerian.

The meeting follows Tinubu’s absence at the breaking of the Ramadan fast with President Muhammadu Buhari at the Presidential Villa on Tuesday.

Previous Maureen Badejo: The Satanic Agent, Blackmailer In Futile Moves Against Apostle Johnson Suleman Exposed With Audio Evidence
Next 2023: ‘Jonathan Has Sealed A Deal With Buhari On Presidency’ – Sources