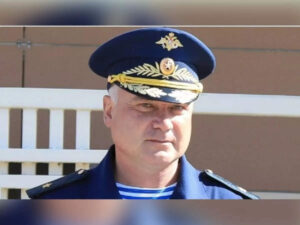 In what could be termed as a big win, Ukraine fighters have reportedly killed a top Russian general amid fierce war.
Reports obtained by Naija News on Thursday claimed that Major General Andrey Sukhovetsky was killed yesterday after Ukrainian defence forces repelled the Russian offensive.

The General who was the deputy commander of the 41st Combined Arms Army of Russia’s Central Military District, was reportedly killed by a sniper.

The report is coming a day after the Russian Ministry of Defence said it has so far recorded 498 casualties in the war against Ukraine.

YOU MAY ALSO LIKE:   My Bank, My Wife and The New Social Order

It further disclosed that more than 1,500 of its servicemen were injured since the invasion of Ukraine was launched last Thursday.

Defence ministry spokesman, Igor Konashenkov, however, has argued reports about ‘incalculable losses’ among Russian forces, describing it as ‘disinformation’.

Ukraine has, however, noted that the true number of Russian troops killed is higher than Moscow admits.

A statement credited to Sergei Chipilev, a deputy of the Russian veteran’s group, on General Sukhovetsky’s demise read: “It is with great sorrow that we learned of the tragic news about the death of our friend, Major General Andrei Aleksandrovich Sukhovetsky, on the territory of Ukraine during a special operation.”

Meanwhile, the President of Ukraine, Volodymyr Zelensky, on Wednesday offered to waive visa requirements for foreigners who helps fight in their war against Russia.

YOU MAY ALSO LIKE:   Lalong Re-Imposes 24-Hour Curfew In Jos Communities

Zelensky authorised a decree that would allow foreigners to assist his country in the fight against Russian troops that invaded the country last Thursday.

For foreigners who want to help in the war, the decree brings in a “temporary visa-free regime”.

Ukraine at the moment requires citizens from the European Union and the US to have visas of more than 90 days within six months for visiting.

YOU MAY ALSO LIKE:   Tragedy As Two Nigerian Friends Drown In Malta Sea

The visa-free regime, however, was not extended to citizens of Russia who were described as “citizens of the aggressor state.”

Previous Adegoke Murder: Court Orders Adedoyin, Six Others To Be Remanded In Prison
Next Timaya Tenders Public Apology amidst hit and run allegation