You have to perform at a consistently higher level than others. That’s the mark of a true professional. ~ Joe Paterno 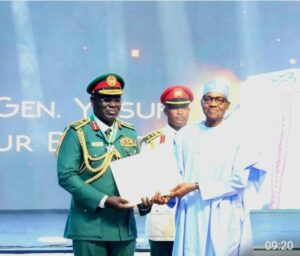 Of a truth, Past performance produces present privileges. This aptly describes Ambassador Tukur Buratai (CFR) who remains an exceptional diplomat and whose service record speaks volumes of an unalloyed commitment to the Nigerian dream and an equally astonishing level of patriotism to those ideals that define us as a people and country.

Interestingly, only few know that Ambassador Buratai is a humble man who is a perfect example of a man who beautifully has power but don’t use it. A man of few words whose compassion Is a direct opposite of the archaic impression that military men are expressionless, mean and authoritarian.

My encounters with him during his service years as the chief of army staff and currently as the Nigerian Ambassador to the Republic of Benin made me realise that he is an exceptional personality who is imbued with unsual intelligence, charisma, compassion, discipline, vision and mission to help individuals, organisations and nation interpret their dreams. He is a barrier breaker and a line crosser. This explains why he is grossly misunderstood by many who wonder how can one man be so favoured and endowed with exceptional qualities and achievements. No wonder among his peers, he is greatly flavoured.

YOU MAY ALSO LIKE:   Youths Can Be Catalyst Of Creative And Innovative Agents To Strengthen Democracy As Buhari Signs Electoral Bill Into Law - Ambassador Buratai

He is a great listener with a listening ear, cool, calm and collected. I can say with with all modest that he is not the flamboyant type. Rather, he invest in human assets by helping them to interpret their dreams and visions.

The way and manner he was able to turn around the fortunes of the Nigerian Army were also outstanding and in record time. From a lethargic situation to a combatant position in less than a year, the result was felt across the country with regards to addressing the security situation in the country. That was the vintage Tukur Buratai.

YOU MAY ALSO LIKE:   AFCON2023: Jose Peseiro Pleads With Nigerians To Give Him More Time With Super Eagles

Again, Ambassador Tukur Buratai was able to contribute his quota in service to the country because the President and Commander-in-Chief recognized his capacity to deliver in that critical assignment and eventually provided the enabling environment for him to flourish.

Truth be told, his nomination as a diplomat was indeed a masterstroke by President Muhammadu Buhari towards utilizing his wealth of experience in service to the country over the years.

His Excellency’s resume is rich and replete with acts of patriotism that would make any nation green with envy. Little wonder he was among notable Nigerians conferred with National Honours by President Buhari few days ago.

YOU MAY ALSO LIKE:   Buratai To Speak At ABU Symposium On National Politics And Insecurity

I quite agree with the fact that Buratai stands tall from the lot and I have no reservations in his strides as a politician. I am aware of his commitment to the Nigerian cause in the course of the several engagements he has had with the members of the intelligentsia community in Nigeria. He has always been robust in his thoughts and engagements which somewhat culminated in the numerous awards and engagements as speaker in a number of intelligent discourse.