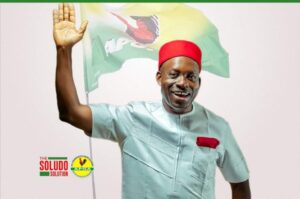 Soludo, candidate of the All Progressives Grand Alliance (APGA), was declared winner of the November 6 governorship election in the early hours of Wednesday by the Independent National Electoral Commission (INEC).

The APGA candidate, who swept 19 of the 21 local governments in the state, polled a total of 112,229 votes to defeat closest rivals Valentine Ozigbo of the Peoples Democratic Party, who secured 53,807 votes, and Andy Uba of the All Progressives Congress, who came third with 43,285 votes.

Amadi, while sharing his view on the election, explained the importance of choosing the right political party to vie for an elective office.

According to him, APGA naturally ought to occupy all government houses in the South-East region because its manifesto was designed to fuse the “Igbo republicanism and communitarianism into a social democratic developmental state.”

Amadi, who is chairman of the legal committee of Igbo think tank Nzuko Umunna, hopes that with Soludo’s victory, the dream of making APGA the prevailing political party in the South East would be achieved.

“Everyone with APGA toga has won governorship in Anambra, including the poor Obiano. It is APGA at work. Since 2003, right from when Chekwa Okorie was National Chairman, APGA has won most of the governorship elections in the southeast but it has been denied, except Anambra where Peter Obi got back his mandate. In 2003, APGA won in Imo and Enugu. It won in Imo again in 2007 with Agbaso and was denied. It won again in 2011 with Rochas Okoroacha,” Amadi, a former Chairman of the Nigerian Electricity Regulatory Commission (NERC), said in a Facebook post.

“The result we see in Anambra is more about APGA than Soludo. Our observers at the polls say people keep saying they want APGA to win governors and PDP win federal. We can say that since APGA was formed in 2003, it has won all governorship elections in Anambra, no matter who was the candidate.

YOU MAY ALSO LIKE:   Police launch manhunt for man who raped his 90-year-old mom

“APGA was designed to be the party in government houses in all southeast states, to continue on the path of MI Okpara and Sam Mbakwe. But the mercantilism of Anambra politicians who, with the help of Ojukwu displaced the founding National Chairman, Chekwas Okorie, made APGA just an Anambra phenomenon. Senator Umeh started that mercantilism and Oye has taken it to a high culture.

YOU MAY ALSO LIKE:   Lagos Speaker, Obasa Urges for APC Continue Unity

“APGA manifesto was designed by Igbo intellectuals led by Professor Obumselu and focused on fusing Igbo republicanism and communitarianism into a social democratic developmental state. It wants to bring back the vision that made eastern Nigeria the fastest growing and the most socioeconomically transformed region in Nigeria in a short burst of developmental energy.

YOU MAY ALSO LIKE:   Husband Collapses As Unknown Gunmen Hack Wife And Daughter To Death

“But alas, Anambra merchants killed the dream. Maybe Soludo may revive that dream.”

Meanwhile, Soludo’s victory did not come without challenges as the 60-year-old was faced with legal battles and intra-party skirmishes before and after the primary election of his party.

His candidacy was sealed after the Supreme affirmed him as the governorship flag bearer of APGA.

A five-man panel of the apex court led by Justice Mary Odili upheld the verdict of the Kano State Court of Appeal which validated the primary election that produced him as APGA’s candidate.