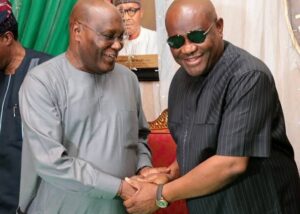 The presidential candidate of the Peoples Democratic Party (PDP), Atiku Abubakar has reportedly offered Governor Nyesom Wike the position of Petroleum Minister if he wins the 2023 elections.

A source close to the negotiation told Premium Times that Atiku also offered the Rivers governor the opportunity to nominate one should the party win the election.

However, Wike camp is insisting on the vice-presidential slot, saying “a promise is not as important as what is currently on hand”.

It was gathered that the Rivers governor insistence in picking the PDP VP slot is behind the delay in the announcement of Atiku’s running mate.

Those in favour of Wike, including some governors, have pointed out his roles in rescuing the party at numerous times and how he had also supported PDP chapters without State governors.

But his critics are of the opinion that the Rivers State governor is not “presidential in conduct”.

They also claim that he would be a dangerous deputy and divisive figure in the presidency should they take over power in 2023.

On the other hand, Okowa who enjoys massive support among PDP leaders was instrumental in the emergence of Atiku as the presidential candidate of the PDP.

According to Premium Times, Atiku is said to also prefer Okowa to run as his vice president.

But the possibility of Wike adding a stronger political structure and financial muscle to the ticket is delaying Atiku’s decision.