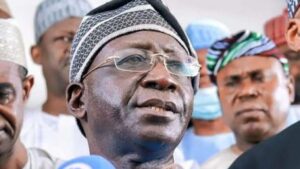 The meeting of the National Caucus of the Peoples Democratic Party, PDP, failed to agree on the ouster of its beleaguered National Chairman, Iyorchia Ayu after its meeting that ran till early morning of Thursday.

The large meeting which was attended by highly placed members of the party is very influential as it sets the tone for what takes effect in the party.

The host governor, Udom Emmanuel of Akwa Ibom State, failed to attend the meeting which held at the Akwa Ibom State Governors Lodge but his deputy attended.

It was not clear why the governor of Adamawa State, Ahmadu Fintiri, who was in town failed to attend the meeting but instead sent his deputy to represent him. The deputy governors of Edo and Benue represented their governors.

YOU MAY ALSO LIKE:   Just in: EFCC chairman, Bawa slumps in Aso Rock

It was gathered the Caucus could not agree on the fate of Ayu, who was in attendance as it tactically shifted the decision to NEC, which holds later today.

But speaking after the meeting, Ologunagba said the issue of Ayu’s ouster was never discussed.

“We are ready to go. Members of the campaign council will be announced on Thursday (today), after the NEC meeting,” he said.

YOU MAY ALSO LIKE:   We Used Our Spiritual Powers To Send Nnamdi Kanu, Sunday Igboho To Jail – Miyetti Allah Brags

Explaining why most of the governors failed to attend the caucus meeting, Ologunagba added, “Some of them were on holiday, outside the country. They were represented by their deputies.”

It was gathered the plot to remove Ayu has divided the party into North and South.

The South, which is being spearhead by the Wike camp is allegedly led by Deputy National Chairman (South), Ambassador Taofeek Arapaja.

At its meeting at his residence last night, Arapaja group of the National Working Committee of the party, insisted that Ayu must go.

Protesters allegedly sponsored by his camp were seen with placards saying, ‘Ayu Must Go’, at the venue of the National Caucus meeting in the night.

YOU MAY ALSO LIKE:   Be Responsible For Your Own Safety – Nigerian Govt Advise Citizens In Ukraine

The Arapaja’s group was countered by the Northern group led by the Deputy National Chairman (North), Umar Damagum. His group has also prefected plans to protect Ayu at today’s NEC meeting.

At the coming NEC meeting, it’s gathered two items will be listed for discussion, Ayu’s fate and composition of the party’s presidential campaign council as the start of campaign is less than 20 days away.

Wike, supported by loyal governors and highly placed members of the party and strong stakeholders, has insisted Ayu must go and is prepared to sponsor a vote of no confidence on him at the NEC meeting today.

He has said Ayu’s compromising leadership style by pandering to Atiku during the party’s presidential election and the entire headship of the party leadership positions can not work unless the party is ready to accept defeat in 2023 elections.

Previous 2023: One Million Lagosians Abandon PVCs Across INEC Offices – REC
Next We Will Ensure ‘Made In Nigeria’ Products Are Available In Paris, England, Others– Firm